Poll: 59% Believe Businesses Should Be Able to Decline Gay Weddings 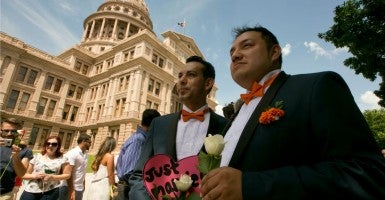 On July 4, 2015, several same-sex couples were married on the lawn of the Texas Capitol building in Austin. (Photo: Marjorie Kamys Cotera/Polaris/Newscom)

Four in ten Americans support and an equal percentage disagree with the Supreme Court decision on gay marriage in June.

Asked about the Supreme Court’s decision on Obergefell v. Hodges, 39 percent of respondents said that they agree with the ruling and 41 percent said that they disagree, according to an Associated Press-GfK poll.

The poll also found that 59 percent of Americans believe that business owners should be free to decline to participate in a same-sex wedding service if they feel doing so would violate their religious beliefs, up from 52 percent earlier this year.

Ryan Anderson, senior research fellow at The Heritage Foundation and author of the new book “Truth Overruled: The Future of Marriage and Religious Freedom,” said “the poll is just the latest indication that the Supreme Court did not—because it cannot—settle the marriage debate.”

“Americans remain divided on the question of what marriage is and why marriage matters, and now is the time for conservatives to make the case for marriage,” Anderson said.

Anderson added that he was “encouraged that the poll reveals a majority of Americans agree that the government should not coerce or penalize anyone because they act on the belief that marriage is the union of husband and wife.”

Recently, businesses that provide wedding services such as bakers, florists and photographers have come under fire when their owners have chosen not to participate in same-sex wedding ceremonies.

Some businesses that don’t typically provide wedding services, such as a pizzeria, have also come under fire.