Indiana Pizzeria Under Fire for Support of Religious Freedom Law 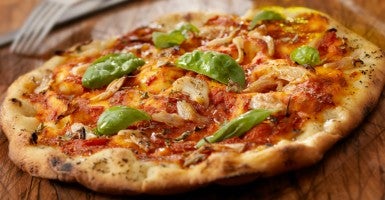 A pizzeria in Indiana has come under fire for supporting the state’s controversial Religious Freedom Restoration Act.

Memories Pizza is owned by the O’Connor family of Walkerton, Ind.

Crystal O’Connor told Indiana’s WBND that the family business is “a Christian establishment.”

“If a gay couple came in and wanted us to provide pizzas for their wedding, we would have to say no,” she said.

O’Connor said “we definitely agree with the bill,” adding that her opposition to same-sex marriage is not about discrimination.

“We’re not discriminating against anyone, that’s just our belief and anyone has the right to believe in anything,” she said. “I do not think it’s targeting gays. I don’t think it’s discrimination. It’s supposed to help people that have a religious belief.”

O’Connor also told WBND that they would “never” deny service to a gay couple who wanted to eat in their restaurant, but would only decline if asked to cater a wedding. The O’Connor family ignited a social media firestorm after weighing in on the controversial topic, with many calling the business hateful and bigoted.

Oh, #MemoriesPizza. As a former restaurant P.R. pro it was fun to watch you open your bigoted mouth and kill your business. #BoycottIndiana — Eileen (@Percysperson) April 1, 2015

Get we get a PR crisis management team for a triage at #MemoriesPizza #codeblue #trainwreck — AdamA (@AdamTweetsBest) April 1, 2015

The O’Connors have also received support.

Gay marriage is legal in Indiana. But that’s not enough. Nothing will ever be enough. #MemoriesPizza #BoycottIndiana — Jim Treacher (@jtLOL) April 1, 2015

The free market will determine the future of businesses like #MemoriesPizza. You use your voice, not your gov’t. Do you liberals get it now? — SaltWaterGirl (@DonnaBee511) April 1, 2015

If you are so inclined, go give a good review to #MemoriesPizza to offset the intolerant left leaving bad reviews. #BoycottIndiana — Todd (@DCToddM) April 1, 2015

Some noted that pizza is not typical wedding food.

U know the owners of #MemoriesPizza r out of touch w/reality when they think any self respecting gay would ever cater pizza 4 their wedding. — Big Gay (@onerebeldevil) April 1, 2015

TheBlaze’s Dana Loesch tweeted that she spoke with the O’Connor family today, and they will be guests on her show Wednesday evening.

#MemoriesPizza owners say they’re considering packing up and leaving town due to the threats from the #BoycottIndiana crowd. — Dana Loesch (@DLoesch) April 1, 2015

The Daily Signal has previously reported that polls show a majority of Americans believe businesses should be free to decline to provide services for a same-sex marriage if participation violates their religious beliefs.