Greek Economy Has Shrunk More Than U.S. Did in Great Depression 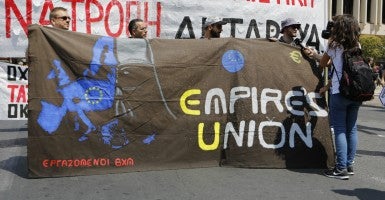 The banner was held in a Greek march against austerity. (Photo: Michael Debets/ZUMA Press/Newscom)

After 1945, the U.S. promoted economic freedom and growth in Europe to keep Communism at bay. Today, by backing the European Union in Greece, the Obama administration is driving Greece deeper into a depression that already has brought the far left to power.

Greece desperately needs pro-market reforms. It spends too much on welfare; its tax system is a disaster, and its regulators are out of control. (Just ask the Greek olive oil merchant who, in 2011, was required to submit a stool sample before he could open an online store.)

Not surprisingly, Greece is a “mostly unfree” economy, having recorded its lowest score ever in the 2015 Index of Economic Freedom, an annual country-by-country study by The Heritage Foundation and The Wall Street Journal.

But Greece isn’t in crisis merely because it has a dysfunctional economy. It’s in crisis because after 2001, when it joined the euro, it was able to borrow money at rates close to Germany’s.

Regrettably, Greece’s economy isn’t as strong as Germany’s. Because it was able to borrow money too cheaply, Greece borrowed too much. Letting Greece into the euro was like giving the town drunk an open bar tab and the keys to the Mercedes: A crash was inevitable.

This kind of crisis usually ends with the borrower defaulting on its debts and devaluing its currency. That’s not a get-out-of-jail-free card: imports get more expensive, prices go up, and lenders lose money. But the alternative is worse.

Regrettably, Greece can’t devalue its currency, because it uses the euro. So Greece is enduring that worse alternative. If you can’t deflate internationally—by making your currency cheaper—you have to deflate domestically. In other words, you have to have a depression.

Americans don’t appreciate how terribly Greece has suffered. Since 2008, its economy has shrunk by more than a quarter. That’s worse than the Great Depression.

Greeks responded by voting for the political extremes, exactly as the United States feared Europe would do after 1945. In 2015, Golden Dawn, a fascist party, won 6 percent of the vote. The Syriza party, a new player formed by a merger of Communist parties, won with 36 percent.

Syriza has terrible ideas. Its rejection of austerity comes down to more borrowing, more welfare, and more taxes. It wants to stay in the euro, but only because if they leave, the European Union won’t bail them out.

But just because Greek ideas are bad doesn’t mean European ones are good. Germany’s position is clear: The Greeks must pay. So is Washington’s. Over the last several days, the Obama administration has urged the two sides to reach a deal that keeps Greece in the euro.

None of this is about Greece: It’s about creating precedents for dealing with Spain and Italy, which are next in line. But we should think about what is actually happening in Greece. If Greece both pays up and stays in the euro, its depression can only get worse. The latest proposals, which keep Greece in the Euro and paying its debts for the next seven years, while raising taxes, are more of the same.

Yes, Greek political culture is rotten. Even at the bottom of the Great Depression, the United States and Britain didn’t vote for communists and fascists. But that should make us more cautious about dealing with Greece. Putting Greece through the wringer will not fix its politics.

Too many American politicians give the EU unthinking support. To them, the EU is a force for stability. But Greece gives that notion the lie. Without the euro, Greece would not be in this mess. Backing the EU means pushing Greece even deeper into the pit. Greece is already voting for fascists. It has already elected communists. It could get worse.