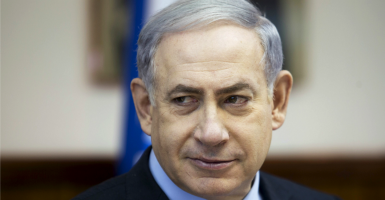 “I think this puts all of us in danger. Israel, our Arab neighbors, the Middle East as a whole,” Netanyahu told ABC.

Netanyahu tweeted that the United States and Israel are especially endangered by the deal.

President Obama and other world leaders reached a diplomatic deal with Iran on Tuesday after several months of negotiations with Tehran. Netanyahu has long been critical of the deal, even condemning it during an address to Congress earlier this year.

“I wish there was a better deal, I would have supported it,” Netanyahu said.

The United States along with the P5+1 powers—Britain, France, Germany, Russia and China—agreed in the proposed deal to lift economic sanctions on the Iranian regime in exchange for Tehran’s agreement to reduce its centrifuges. Iran can maintain its enrichment capabilities, though they will be limited.

Lifting sanctions will free over $100 billion of Iranian assets.

“I think to give Iran these capabilities is a grave mistake,” Netanyahu told ABC.

World powers have made far-reaching concessions in all areas that were supposed to prevent Iran from obtaining a nuclear weapons capability.

Under the terms of the deal, international inspectors must seek permission from a joint commission in order to inspect an Iranian military site, which could take more than three weeks.

“Imagine giving a drug dealer 24 days before you inspect the meth lab he has,” Netanyahu told ABC. “That, as I say, is a lot of time to flush a lot of meth down the toilet.”