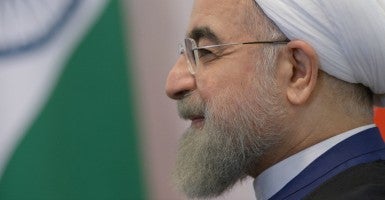 President Obama long pursued the accord as a defining piece of his foreign policy legacy, calling the agreement a “comprehensive long-term deal with Iran that prevents it from obtaining a nuclear weapon.”

During a White House speech broadcast live in Iran, Obama acknowledged a tough road ahead in Congress, but promised to veto any legislation that barred the deal’s full implementation.

“We have stopped the spread of nuclear weapons in this region,” the president said, pointing to potential ripple effects in the Middle East. “This deal offers an opportunity to move in a new direction. We should seize it.”

The accord capped off 18 days of consecutive negotiations in Vienna with Iran and the P5+1—the U.S., Britain, France, Germany, Russia and China.

Under the agreement, Iran will be required to reduce its centrifuges—machines that enrich uranium used in nuclear bombs—by two-thirds. Iran must additionally reduce its current stockpile of uranium by 98 percent for 15 years. Limits will also be placed on its research and development capabilities for advanced centrifuges.

Iran must also allow inspectors from the U.N.’s International Atomic Energy Agency to access certain sites to ensure Iran is complying with the deal. Obama said this provision asserts the deal is “not built on trust, it is built on verification.”

In exchange, U.S. and international economic sanctions against Iran will be lifted, along with the European Union’s oil embargo, unfreezing $100 billion in Iranian assets and allowing Tehran to begin selling its oil on the international market again.

These sanctions may immediately be reimposed with a majority vote on a U.N. panel if the International Atomic Energy Agency judges that Iran is violating the deal.

While negotiators lauded its completion, Israel’s Prime Minister Benjamin Netanyahu was not as optimistic. He denounced the agreement as a “historic mistake,” firing at the U.S. and its negotiating partners for making “far-reaching concessions” that would lead to a “terror nuclear superpower.”

Congress will have 60 days to review the deal before legislators will vote to accept or reject it—or do nothing. But under terms set by Congress, the president can veto any resolution of disapproval. Congress needs a two-thirds majority in each house to override the veto.