Why Netanyahu’s Speech to Congress Is Churchillian 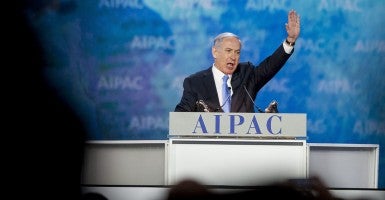 The Israeli leader will do so at the invitation of House Speaker John Boehner, R-Ohio, and much to the dismay of the White House, which is close to signing an agreement with Tehran on its nuclear development, which Israel strongly opposes, as do many members of Congress.

Netayahu’s position is reminiscent of nothing so much as that of British statesman Winston Churchill before World War II. In his unprecedented agreement to address Congress against the will of the White House, Netanyahu is placing Israel’s national security above his relationship with the U.S. president, who has shown him little respect in the past.

Unpopular though Netanyahu’s decision may be on Pennsylvania Ave. and in Foggy Bottom, the stakes for Israel justify these extraordinary measures. Netanyahu told a meeting of the American Israel Public Affairs Committee Monday, “Israel won’t be passive in the face of those who want to annihilate us.”

One is reminded of Winston Churchill’s pre-World War II repeated and unwelcome warnings to the British parliament against Germany’s rearmament (in violation of the Versailles Treaty) following Adolf Hitler’s power grab in 1933. “Germany... fears no one,” Churchill kept hammering. “She is arming in a manner which has never been seen in German history. She is led by a handful of triumphant desperadoes.”

Churchill made himself hugely unpopular with the leadership of his own party, the Conservatives. Meanwhile, Conservative leader Neville Chamberlain went to Munich in 1938 to seal the fate of Czechoslovakia with Adolf Hitler’s emissaries, and secure the fool’s gold of “peace in our time.”

Churchill saw an existential threat to Britain though, and he was right. After invading Poland, Holland, Belgium, France, Denmark and Norway, Germany commenced the Battle of Britain in July of 1940, conducting blitzkrieg with the planes Hitler had been busy building in the 1930s and which Churchill had warned against.

If Netanyahu ever feels depressed about the lack of support he is getting from the White House, he may feel some consolation in the fact that Winston Churchill himself – or at least a bust of Churchill – was returned from the Oval Office by Obama staffers to the British embassy in one of the first diplomatic missteps of the new administration in 2009. When the Israeli leader gets the cold shoulder from the White House, he is in good company.