What Members of Congress Tweeted About Netanyahu’s Speech 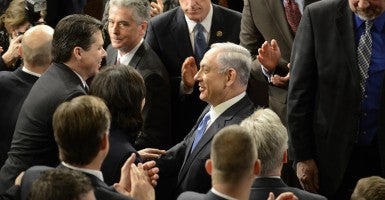 Israeli Prime Minister Benjamin Netanyahu makes his way past members of Congress as he arrives to address a joint meeting of Congress on nuclear talks with Iran, at the U.S. Capitol, March 3, 2015, in Washington, DC. (Photo: UPI/Mike Theiler)

The speech focused on the deal that President Barack Obama and his administration is trying to reach with Iran over nuclear capabilities. During and after Netanyahu’s speech, members of the House and Senate took to Twitter to react.

I welcome opportunity to hear Israel PM Netanyahu & appreciate his insight as an experienced leader in the MiddleEast http://t.co/BUqCeYGVq1

Glad that #Netanyahu began with rundown of unprecedented support from Obama and this Congress to Israel. #NetanyahuSpeech

I will be attending the joint session to hear from PM @netanyahu soon. I look forward to hearing from the leader of one our greatest allies.

Prime Minister Netanyahu: “I know that you stand with Israel.” pic.twitter.com/WsXRm0bxEY

In just a few mins Prime Minister @netanyahu will address a joint meeting of Congress. Proud to attend. http://t.co/VVVI9RYQLH #Netanyahu

Pleased to have my wife Shirley join me for PM Netanyahu’s address in just a few minutes now– will you be tuning in? pic.twitter.com/KlFnLwUMlN — Randy Forbes (@Randy_Forbes) March 3, 2015

PM @netanyahu will address a joint meeting of Congress live at 10am ET. @CSPAN I’m grateful to be in attendance.

Looking forward to Bibi speech — expect him to elaborate on the threats facing Israel, US and world

I stand with #Israel – our friend and ally – & welcome PM Ben Netanyahu to the House for a Joint Session of Congress pic.twitter.com/FHQ4E0DeVI

It was an honor for @rcamposDuffy & me to meet Mr. Netanyahu in Israel – proud to support him today. #StandWithIsrael pic.twitter.com/975tCxhuzE — Sean Duffy (@RepSeanDuffy) March 3, 2015

The stakes are too high for America not to fully support one of our closest and most steadfast allies. #IStandWithIsrael #Israel

Bottom line: glad I went. But time to flush the politics out of support for Israel. It should never again be a D/R issue. — Chris Murphy (@ChrisMurphyCT) March 3, 2015

I thought it was disingenuous for #Netanyahu to act as if a “deal” was done. Admin still tells me it’s less than 50/50.

It’s an honor and a privilege to attend today’s joint session of Congress and hear from Israeli Prime Minister #Netanyahu. #StandWithIsrael

I was proud to be a part of PM @Netanyahu’s official Escort Committee, and I was honored to personally greet him. pic.twitter.com/SE5yzLzYlV — CathyMcMorrisRodgers (@cathymcmorris) March 3, 2015

interesting bow to Obama for his support, things that could have been acknowledged long before this unfortunate event, but were not — Earl Blumenauer (@repblumenauer) March 3, 2015

Not all members of Congress were pleased to have Netanyahu speak.

Let’s call this speech what it really is: a campaign stunt. I refuse to be anyone’s political prop. http://t.co/TcVQmFAbsU #SkipTheSpeech — Gwen Moore (@RepGwenMoore) March 3, 2015

Still, the speech had significant support from both chambers with a few critics mixed in.

On #NetanyahuSpeech: “It’s important for Congress & the American people to hear from such strong allies” http://t.co/mMPPjy8uFN

Prime Minister Netanyahu’s speech was amazing–Churchill-like clarity and strength. I pray we learn from history, not repeat its mistakes.

Thoroughly impressed by Prime Minister @netanyahu. That was a great speech! #NetanyahuSpeech #StandWithIsrael

I hope Congress will exercise its right to have a say on any deal between P5+1 and Iran on their nuclear program. — Lindsey Graham (@GrahamBlog) March 3, 2015

interesting statement of known problems, waiting for any hint he has a solution that is better than diplomacy… — Earl Blumenauer (@repblumenauer) March 3, 2015

The shameful process of Netanyahu’s speech aside, the administration will have to answer his critique point by point

Standing room only on Repub side of chamber so many are spread out. Bibi is giving an impassioned plea for restraint. #JointSession #Isreal — Rep. Bill Huizenga (@RepHuizenga) March 3, 2015

still chewing on the statement that Iran and ISIS are equivalent

1/4 No single individual has done more to harm the vitally important U.S.-Israeli relationship than @Netanyahu #NetanyahuSpeech

2/4 The Israeli electorate will decide whether to entrust a man with his temperament & judgment to be custodian of US/Israel relationship — Rep. Peter Welch (@PeterWelch) March 3, 2015

3/4 With this speech, @Netanyahu has made the decision to undermine delicate negotiations over Iran’s nuclear program #NetanyahuSpeech

4/4 I am listening carefully to @Netanyahu. What is his Plan B to negotiations? Military intervention? If so, he should say so.If not, what? — Rep. Peter Welch (@PeterWelch) March 3, 2015

Rep. Mike Fitzpatrick, R-Pa., took to Twitter in a series of tweets to call for the sniping before the speech to pass, and to work a more united front in defense of Israel.

I was pleased to welcome PM Netanyahu to a joint session of Congress today and appreciated the strength and purpose of his address. (1/9) — Mike Fitzpatrick (@RepFitzpatrick) March 3, 2015

As the United States’ strongest ally and a force for democracy and freedom in the Middle East, I stand with Israel and their efforts (2/9)

to protect their homeland & prevent proliferation of those who would see them destroyed. Mr Netanyahu’s speech was one which sought to (3/9) — Mike Fitzpatrick (@RepFitzpatrick) March 3, 2015

unite us across geographical and ideological lines for the common goal of a nuclear-free Iran. As the Obama administration continues (4/9)

moving forward with the P5+1 negotiations with Iran in the coming weeks, it is important to heed Mr. Netanyahu’s words and ensure (5/9) — Mike Fitzpatrick (@RepFitzpatrick) March 3, 2015

Support for Israel has always been an area of bipartisan agreement in our nation’s capital, and it is my hope that moving forward the (7/9) — Mike Fitzpatrick (@RepFitzpatrick) March 3, 2015

in favor of the larger objective of a safe Israel and a stable region. (9/9) — Mike Fitzpatrick (@RepFitzpatrick) March 3, 2015