Netanyahu’s Reelection Is a Win for Israel and the US 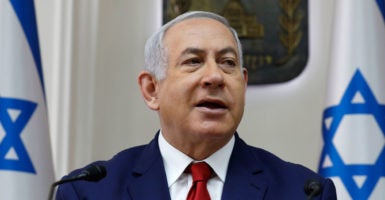 The dust has settled, the votes have been counted, and Prime Minister Benjamin Netanyahu has been reelected to serve Israel for a record-setting fifth term.

The Jewish people have once again placed their trust in a prime minister who has guided their nation to unprecedented success while simultaneously defending it against a slew of powerful enemies both near and far.

This reelection is a victory for Israel. It helps ensure that the Jewish state will continue to thrive in the coming years.

Israel is a raucous young democracy whose parliamentary system requires constant shifting to assemble coalitions, so its national elections are always interesting. Netanyahu’s achievement of reelection this many times is nothing short of incredible, and it speaks to his unparalleled abilities as a master politician.

However challenging the political landscape within Israel may be, Netanyahu has used his skills as an adept orator and pragmatic strategist to cement his legacy and place in Israel’s history. Keep in mind that this has happened despite the recent cloud cast by indictments alleging corruption. Time will tell whether or not the charges eventually derail Netanyahu’s career or cast a permanent stain on his legacy.

Yet, Netanyahu is not merely a talented politician; he is also an excellent leader. While every political figure has his or her critics, there is no denying the many fruits that Bibi’s tenure has yielded for Israel throughout the years, from staggering economic development to a sober and measured foreign policy that continuously expands its roster of allies. Israel has emerged as a key player on the world stage, and Netanyahu’s leadership is a primary cause.

Despite its small size, Israel’s economy is booming. The tiny nation is the third-largest producer of companies traded on Nasdaq. By fostering a rich startup culture, Israel has become an international trailblazer in medical research, technology, and pharmaceuticals.

In recent weeks, Israel’s national hospital, Sheba Medical Center at Tel Hashomer, was named one of the top 10 hospitals in the world. I have visited Sheba and observed modern-day miracles taking place on a near daily basis.

Netanyahu is precisely the seasoned and resilient leader that Israel needs right now, as the stakes for the country’s security have never been higher. Israel is surrounded by increasingly radical and dangerous neighbors, living under constant threat from surrounding foes who want to see it destroyed and its people harmed.

Fortunately, Netanyahu has cultivated a true friendship with President Donald Trump, who understands the immense value in our strategic alliance with Israel and is prepared to protect it. Israel is the only true democracy in the entire Middle East and the most reliable U.S. ally in a tumultuous region, so its relationship with the United States is of the utmost importance.

Unlike President Barack Obama, who naively and cynically rushed forward into a nuclear deal with the terror-sponsoring regime in Iran, Trump understands that the deeply flawed contract was detrimental to U.S. national security and global peace.

As he promised to do as a presidential candidate in the 2016 election, Trump canceled the Iran nuclear deal, ending the disastrous policy of providing economic relief to a despotic theocracy hell-bent on acquiring the world’s most destructive weapons.

As Netanyahu has correctly noted, never before has Israel had a more committed friend in the White House. In fact, Trump recently acknowledged Israel’s right to the Golan Heights—a territory gained from Syria in the Six-Day War of 1967, which had Israel fighting for survival. Trump also fulfilled a pledge to move the U.S. Embassy to its rightful place in Israel’s capital city, Jerusalem.

In word and deed, Trump has honored the historic partnership between Israel and the United States of America.

With the knowledge that Israel has a committed and trustworthy friend in Washington, Netanyahu’s reelection guarantees that the close ties between Israel and the United States will not just survive but thrive.

Look to Israel in the coming years to continue its advancement as a beautiful, liberty-loving nation that is the eternal homeland of the Jewish people and a beacon of light and positivity in an otherwise tumultuous part of the world.

Having met Netanyahu on various occasions, I can attest to his brilliance and deep love for his country. It is not surprising to see that he has yet again captured the hearts and the votes of the Israeli people and earned their trust to serve once again as prime minister.

I am very happy to congratulate Netanyahu on his hard-fought victory and am confident he will continue providing smart and strong leadership for the wonderful nation of Israel.