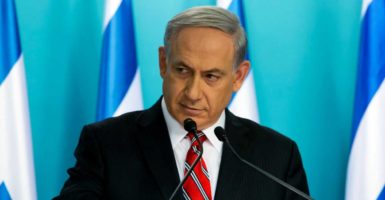 Israeli Prime Minister Benjamin Netanyahu’s visit to the White House on Wednesday will mark a chance for the United States and Israel to renew a relationship that had turned tumultuous in the eight years under President Barack Obama’s administration, experts say.

“It probably won’t take long to return to the warm relationship that has characterized the U.S.-Israeli relationship before,” @JSchanzer says.

“It probably won’t take long to return to the warm relationship that has characterized the U.S.-Israeli relationship before,” said Jonathan Schanzer, vice president of research at the Foundation for Defense of Democracies, in a phone interview with The Daily Signal.

Schanzer believes both the Iran deal and the settlements issue can be addressed without too much controversy.

“With the settlements, there was common ground reached by Bush and Ariel Sharon, which allowed Israelis to continue to build in areas that already have significant Israeli population,” Schanzer said, referring to former President George W. Bush and Sharon, a former Israeli prime minister.

Schanzer added it might be difficult to undo the entire Iran nuclear deal, which relieved sanctions on the country, and was agreed upon by the United States and five other countries. However, it’s likely Trump will enforce the agreement in a way Obama would not.

“It will be about rigorous enforcement of the deal and not allowing Iran to cheat even in minor ways,” Schanzer said. “The Obama administration wouldn’t enforce this out of fear the deal would unravel. Trump doesn’t care about Obama’s foreign policy legacy.”

If the deal is enforced, Iran might be the country that walks away, said Jim Phillips, senior research fellow for Middle Eastern affairs at The Heritage Foundation. Phillips recently wrote about rebuilding the relationship between the U.S. and Israel.

“It’s difficult to walk away from the deal now without putting Iran in a better place [than before the deal was made],” Phillips told The Daily Signal. “If the U.S. is out, it’s very unlikely that Russia or China would reimpose international sanctions on Iran.”

Phillips said with vigorous enforcement, Iran is likely to violate the deal, which will mean sanctions should be imposed again.

Though Obama and Netanyahu had a rocky relationship, Trump called Netanyahu during his first week in office.

Another major issue could be moving the U.S. Embassy from Tel Aviv to Jerusalem.

>>>What Trump’s Decision to Move Embassy to Jerusalem Would Mean

“Israel supports the move and the U.S. wants to do it in a way that respects security for all in the region,” Schanzer said. “For the U.S., it’s not as complicated as it might seem. It is a very achievable goal if the administration remains committed to it.”

Phillips believes the administration should move slowly on this matter.

“The administration has signaled it will move very cautiously, as they should, because this has the potential to be an explosive issue and could ignite a firestorm even with some allies in the Middle East,” Phillips said. “I would think they will do that this year, but maybe not in the next few months.”