Why ISIS May Be More Dangerous Than al-Qaeda Ever Was 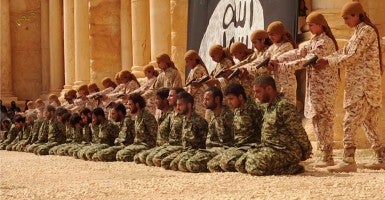 ISIS released a video showing 25 Syrian government soldiers being executed by teenagers in the ancient amphitheater in the city of Palmyra. (Photo: News Pictures/ Polaris/Newscom)

It’s been only two years since the Islamic State began to claim territory in the Middle East, and the organization, also known as ISIS, already has become more successful and much more dangerous than al-Qaeda ever was in its 20 years of operations.

It controls more territory, has acquired more money and has recruited more people than al-Qaeda ever did. That was the conclusion of a panel of experts who gathered last week at The Heritage Foundation to discuss ISIS and what America needs to do to defeat the terrorist group.

First, ISIS is a “self-generated, fully-fledged, transnational insurgency,” which is much more than a mere terrorist group, said Dr. Sebastian Gorka, chair of military theory at Marine Corps University. Because it views its mission as re-establishing a caliphate, it seeks to hold territory, which al-Qaeda did not. It now holds a swath of Iraq and Syria that is larger than the United Kingdom. Members of al-Qaeda’s Nusra Front walk along a street in the northwestern city of Ariha, after a coalition of insurgent groups seized the area in Idlib province May 29, 2015. (Photo: STRINGER/REUTERS/Newscom)

Third is the raw numbers. ISIS has recruited between 16,000 and 20,000 fighters from 90 different countries in the past nine months, numbers that al-Qaeda could only have dreamed about. It recruited 6,000 in just the month of Ramadan, according to Sara Carter, a senior reporter at the American Media Institute who has embedded with troops on the Afghanistan-Pakistan border and says the organization is “working day and night” to bolster its numbers.

Finally, there is the caliphate, re-established by ISIS after a 90-year absence. Gorka called this the “pinnacle of extremist Islamist threat.”

Katherine Zimmerman, a research fellow and lead analyst on al-Qaeda at the American Enterprise Institute, put the development in starker terms.

“ISIS sees itself as uniting the jihad,” she said.

And unlike al-Qaeda, whose mission is to “break the West,” Zimmerman said ISIS’ more comprehensive plan aims to break Muslim states too in order to build its own vision of the caliphate.

What should the U.S. do about this looming threat? Much more than it is doing now, the panel agreed.

“It’s not something that you can win with drone strikes alone,” Carter said.

Gorka said the U.S. also must take the fight to the ideological domain. He suggested the Pentagon learn more about Islam and work strategically against ISIS propaganda.

“You can’t defeat an ideology unless you’re able to exploit it,” Carter said in support.

Additionally, the experts agreed ISIS must be challenged on the ground by local troops under the guidance of embedded American troops as advisors.

“And it isn’t just, of course, a reality thousands of miles away,” Gorka said. “With Garland, Texas, and with all the current cases that the FBI director has admitted we are investigating in America, this is very much a threat to the United States as well.”