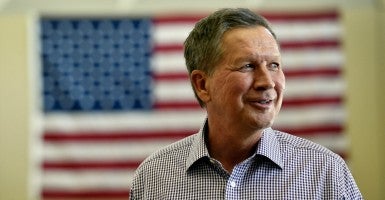 “Now, on this whole business of Common Core, it’s like it’s radioactive, you mention that and everybody all the sudden doesn’t listen anymore,” said Kasich, who is expected to run for president in 2016.

Kasich said the “idea” of Common Core was for “students in every state to be given the opportunity to compete with every other student.”

He said he has worked towards setting high education standards in Ohio.

“I’m going to make sure, at least in my state, that standards are high and local control is maintained,” Kasich continued. “Now, some may call that Common Core. I don’t really know, but I’m telling you the way it is in my state.”

Kasich said education should ultimately rest in the hands of parents.

“We better do a better job of running our schools,” Kasich said. “If we’re going to the have local control, then we have the local responsibility.”

He criticized the “agrarian” and “one-size-fits-all” model of the education system, and called for more vocational training and mentoring programs. Kasich also proposed seeking “the finest private sector minds” to come up with a solution to “overhaul” the Veterans Administration.

Kasich called himself “a Reagan guy,” touting his record of balancing budgets and cutting taxes. He proposed a balanced budget amendment and shifting power from Washington, D.C., “to where we all live.”

“Our children should not be put in debt,” Kasich continued.

Kasich is expected to launch a presidential campaign later this month.

Kasich previously sought the Republican nomination for president in 2000.