Pro-Lifers Didn’t Give Up After Roe v. Wade. Here Are 3 Critical Steps to Take on Marriage. 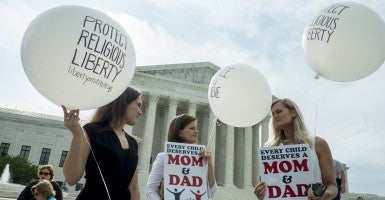 As Chief Justice John Roberts said in dissent: “Today’s decision rests on nothing more than the majority’s own conviction that same-sex couples should be allowed to marry because they want to. … Whatever force that belief may have as a matter of moral philosophy, it has no more basis in the Constitution than did the naked policy preferences” in other rightly condemned activist decisions.

Nothing in the Constitution requires the redefinition of marriage in all 50 states, and five unelected justices do not have the authority to redefine marriage everywhere. Still, the question now is: What do we do?

I suggest that pro-marriage citizens should follow the example of pro-life citizens.

In January 1973, the Supreme Court created a constitutional right to abortion in Roe v. Wade. Pro-lifers were told they had lost, that the issue was settled. The law taught citizens that they had a new right, and public opinion quickly swung against pro-lifers by as much as a two-to-one margin.

Pundits insisted that all young people were for abortion, and elites ridiculed pro-lifers for being on the “wrong side of history.”

But pro-lifers put their hand to the plow, and today we reap the fruits. My generation is more pro-life than my parents’. A majority of Americans now support pro-life policies. In the last decade, states have enacted more laws protecting unborn babies than were passed in the previous 30 years.

The pro-life community stood up and responded to a bad court ruling. Academics wrote books and articles making the scientific and philosophical case for life. Statesmen like Henry Hyde, Edwin Meese, and Ronald Reagan used the bully pulpit to advance the culture of life. Activists and lawyers got together, formed coalitions, and devised effective strategies.

Now everything the pro-life movement did needs to be done again on this new frontier of marriage. Here are three critical steps to take.

Second, we must protect our freedom to speak and live according to our beliefs. The pro-life movement accomplished this by ensuring that pro-life doctors and nurses would never have to perform abortions. It won the battle to prevent taxpayer money from paying for abortions. And it made sure that pro-lifers and pro-life organizations could not be discriminated against by the government.

Pro-marriage forces need to do the same: Ensure that we have freedom from government coercion to lead our lives, rear our children, and operate our businesses and our charities in accord with our beliefs about marriage. Likewise, we must ensure that the government does not discriminate against citizens or organizations because of their belief that marriage is the union of husband and wife.

Third, we must redouble our efforts to make the case for marriage in the public square. To do this, we must use reason and our own personal stories. This is the most compelling way to bring the truth about marriage to light.

Originally published by The Boston Globe