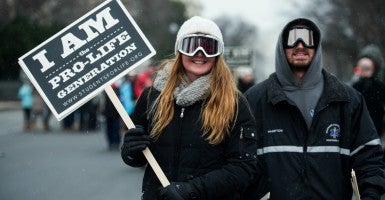 Jan. 22 is a bittersweet day in America.

On this day 43 years ago, the Supreme Court of the United States issued two unconscionable decisions in the cases of Roe v. Wade and Doe v. Bolton that made abortion legal and available on demand across the country.

These decisions defied the spirit and the letter of the Constitution; invalidated 50 state laws; denied the truth about the dignity of all human life and the humanity of the unborn; and ushered in the greatest human rights scandal of our time: an abortion industry that has claimed the lives of more than 50 million of our brothers and sisters…and counting.

But what took place exactly one year later was just as momentous.

On Jan. 22, 1974, thousands of Americans rallied together on the steps of the Capitol building in Washington, D.C., to celebrate life and to stand up for the truth about the unborn.

On that day the March for Life was born, and Jan. 22 has never been the same. Every year since, on that same day, untold thousands of citizens gather in the nation’s capital on behalf of the most vulnerable among us.

No matter what kind of wintry weather awaits them—and this year promises to be severe—these crusaders come to Washington to march for life, sustained by the quiet confidence of a people in possession of the truth.

To all of those marching this year, whether here in Washington or in your own way wherever you are: Thank you for all that you do. You are an inspiration to me and to each new generation of pro-life Americans.