As Senate Stalls, House Conservatives Push for Repeal of Obamacare Through Reconciliation 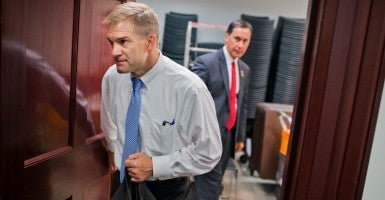 As Senate Republicans continue to discuss using reconciliation to roll back provisions of Obamacare, House Conservatives are encouraging their colleagues to follow through on their campaign promises and move forward with repealing the health care law.

Republicans passed a budget resolution in May that included broad reconciliation instructions, which many members believed would be used for Obamacare’s repeal. The fiscal blueprint directed members of three House and two Senate committees to present a repeal plan by July 24, and many conservative House members backed the budget resolution because of the commitment to roll back the health care law.

However, the Senate hasn’t rolled out a plan to repeal Obamacare through reconciliation yet and are in no rush to meet the July 24 deadline.

House conservatives are urging them to hurry up.

“There’s a strong commitment on the part of members to use the reconciliation process to focus on Obamacare,” Rep. Jim Jordan, R-Ohio, told The Daily Signal. “I think we’re going to do just that. We just need to do that as soon as we can.”

In February, Rep. John Fleming, R-La., led a group of Republicans who urged leadership to support using reconciliation to repeal Obamacare. Though the budget tool can only be used in the Senate, Fleming said reconciliation requires collaboration between both chambers.

Conservatives in the House are committed to using the budget maneuver to repeal Obamacare, but their Senate counterparts have floated plans to use reconciliation to repeal specific aspects of Obamacare such as a the medical device tax—which is disliked by Republicans and Democrats alike—reform the tax code, or increase the spending caps imposed by sequestration.

Conservatives, meanwhile, contend that passing legislation rolling back the health care law makes good on the campaign promises they were elected to follow through on during November’s 2014 midterm elections.

“As I have said before, we must dismantle Obamacare one rotten tooth at time so that health care freedom can be restored to the American people,” Rep. Brian Babin, R-Texas, said in a statement to The Daily Signal. “ … My constituents elected me to repeal Obamacare, and I believe we must use every tool available to make this happen, including the use of reconciliation.”

“That’s what we told voters,” Jordan said. “This has been the most contentious, domestic issue over the past five years, and we told the voters we’re committed to getting rid of this bad law, and we should do that.

Jordan chairs the House Freedom Caucus, a group of more than 40 conservative House members. Many of the group’s lawmakers are pushing to use reconciliation to repeal Obamacare, though it would almost certainly be vetoed by President Obama.

“We can put this on the president’s desk,” Jordan said. “He will veto it, but what it does is—in as clear a fashion as possible—frame the 2016 presidential debate. They’re the party that wants to continue Obamacare, which is just widely unpopular and not the best way to do health care. We’re the party that wants to get rid of it and replace it with a family-centered approach.”

Using reconciliation for the health care law would allow the Senate to pass a repeal of Obamacare with a simple majority, 51 votes. If it’s used to repeal Obamacare, Jordan said the GOP should be prepared to unveil its replacement plan.

“It makes sense for us to show our vision and our model for how we will do health care in a much better way. Frankly, I think it’s important that we work with our Senate colleagues to come up with the best plan,” he said. “But, I think it’s real, real important that we show the American people we are committed to getting rid of Obamacare and put that on the president’s desk and have him veto that.”

GOP lawmakers were waiting for the Supreme Court’s ruling in the case King v. Burwell before coming to a consensus on how to use reconciliation. The case explored the legality of subsidies awarded to consumers living in states using the federal exchange, and the high court ultimately ruled 6-3 to uphold the federal tax credits.

If the Supreme Court ruled against the Obama administration—striking down the federal subsidies—GOP lawmakers likely would have acted swiftly in using reconciliation to fast-track their legislative response to the ruling.

However, the high court’s decision gave Republicans more time to determine how to use the tool.

Though the court ruled in favor of the Obama administration, conservative lawmakers told The Daily Signal the best response to the decision was to move toward a full repeal through reconciliation.

“Now is the time to keep our word, repeal and replace Obamacare with patient-centered solutions that protect federalism, protect religious liberties, protect choices and put patients in control of their health care rather than insurance companies and bureaucrats,” Rep. Tim Huelskamp, R-Kan., said last month.