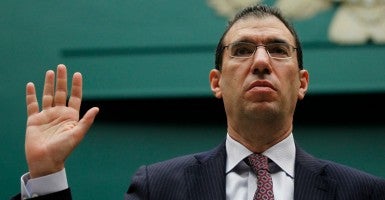 An Obama administration official who faces questions surrounding potential conflicts of interest due to his work in the medical services field has been nominated to serve as head of the agency tasked with overseeing Obamacare.

His appointment to the post was met with skepticism from Republicans in the House and Senate, as Slavitt worked as group vice president of OptumInsight/QSSI, a technology company, before taking the No. 2 post at the Centers for Medicare and Medicaid Services.

The Department of Health and Human Services awarded Maryland-based OptumInsight/QSSI with a contract to build the federal data hub, part of HealthCare.gov, in January 2012.

Then, following the federal exchange’s disastrous launch in October 2013, OptumInsight/QSSI was tasked with fixing the broken website and continued to serve as a “senior adviser” on the project.

OptumInsight/QSSI is the sister company of UnitedHealthcare, a health insurance provider that offers plans on both the federal and state-run exchanges. Both companies are subsidiaries of UnitedHealth Group.

Typically, government officials who leave the private sector for jobs in the administration must wait at least one year before working with their previous employer. However, Slavitt received an ethics waiver from the White House last year, which allowed him to begin working on matters involving OptumInsight/QSSI, his former company.

Slavitt said he severed all financial ties with the technology company when he began working at the Centers for Medicare and Medicaid Services.

Sens. Orrin Hatch, R-Utah, and Chuck Grassley, R-Iowa, previously questioned the potential for conflicts of interest between UnitedHealth and OptumInsight/QSSI, as the technology company would likely have access to sensitive information that could provide UnitedHealth with a competitive advantage.

Hatch, who chairs the Senate Finance Committee, said yesterday Slavitt would have to address OptumInsight/QSSI’s relationship with the Centers for Medicare and Medicaid Services as he goes through the Senate’s confirmation process.

“Mr. Slavitt’s conflicted history in the medical services industry has produced mixed results and raised a number of serious concerns,” he said in a statement. “As such, he will be expected to demonstrate that he is up to the challenge and capable of successfully leading the agency through the monumental tasks that lie ahead.

“Most importantly, Mr. Slavitt will need to answer a number of tough questions regarding his former employer and their relationship with the agency,” Hatch continued.