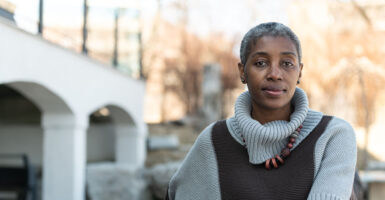 One proposal in Democrats' $3.5 trillion social spending bill not only would increase the number of Americans on government-run health care, but expand the federal government’s role in delivering that care. (Photo: Fat Camera/Getty Images)

A lot of transformative health care policy is embedded in Democrats’ $3.5 trillion social spending bill, including continuation of the Biden administration’s campaign to strip away state flexibility and consolidate greater federal control over Medicaid.

Medicaid, the joint federal-state program to provide health care services to certain low-income Americans, has seen an explosion in enrollment and spending.

The Centers for Medicare and Medicaid Services announced over the summer that a record 80 million Americans are enrolled in Medicaid, and federal spending on it has increased by an estimated 19%.

At the same time, the Biden administration has taken unprecedented steps to curb states’ ability to manage and stabilize Medicaid.

The “Build Back Better” plan, making its way through Congress under a “budget reconciliation” process that will allow Democrats to pass it without any Republican votes, would accelerate these troubling trends and further expand the welfare state.

Most notable in the $3.5 trillion spending bill is creation of a Medicaid-like program. Under the proposal, the federal government would set up and run a new program to provide medical services to individuals in states that elected not to expand their own Medicaid programs.

This proposal not only would increase the number of Americans on government-run health care, but also expand the federal government’s role in delivering that care. Moreover, while the program seems narrowly focused, it is certainly reasonable to assume that it could be expanded and pave the way for a full-blown government takeover.

Rather than expand the broken welfare state, President Joe Biden and Congress should focus on addressing the root causes of the country’s health care woes, such as costly regulations that drive up health care premiums and drive down affordable coverage options.

The Build Back Better plan also would expand Medicaid’s role in delivering long-term care services. If passed, the bill would create a grant program for states to expand access to home and community-based services through Medicaid. It would boost the federal share of costs for states that adopt this expansion, and the federal government also would assume a greater share of related administrative costs.

The COVID-19 relief bills passed by Congress already provided significant federal resources to the states, including an increase in Medicaid assistance for the duration of the public health emergency as well as for home and community-based services.

The spending bill would mean a significant and permanent increase in taxpayer spending on the Medicaid program and exacerbate a growing shift toward the federal government’s assuming a greater share of the cost of Medicaid.

Rather than expand Medicaid’s role in long-term care, Congress should promote private alternatives, preserve the safety net for those who already depend on it, and reduce long-term dependence on Medicaid.

The Build Back Better plan also would undermine state flexibility by imposing new federal requirements on the states.

Under Medicaid, the federal government sets out basic rules and the states have significant authority to design their own programs within those parameters. The spending bill would change the status of some populations and services from optional to mandatory. Rather than giving states the ability to tailor programs to meet their unique demands and needs, this proposal would chip away at state flexibility in favor of federal eligibility and benefit mandates.

Finally, Democrats’ bill also would make policy changes that weaken oversight and accountability over these programs. Specifically, the bill would require that certain enrollees remain on Medicaid for an entire year regardless of changes to their eligibility status.

The bill also would make the process of enrolling in Medicaid easier by making “express” eligibility determinations. And the bill would permanently extend the Children’s Health Insurance Program and its funding, removing the need for regular congressional review of the program and essentially putting it on autopilot.

These actions would strip states of flexibility, remove accountability for these programs, and enlarge government’s control over Medicaid and health care in general. Rather than expand the government’s role in health care and put more federal mandates and requirements on the states, Congress should give states greater flexibility to manage the needs of their citizens without adding to the cost.

This health care fight is about control over dollars and decisions. It is a choice between a federal, one-size-fits-all solution that puts Washington first or a flexible solution that puts Americans in need and those closest to them first.