How Democrats Hope to Revive the Export-Import Bank 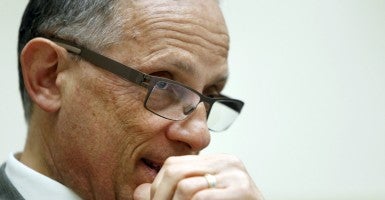 Export-Import Bank Chairman Fred Hochberg testified at a hearing on the bank last month. Ex-Im's charter expired June 30, but Democrats are working to bring the bank back to life. (Photo: Jonathan Ernst/Reuters/Newscom)

For nearly a week, the Export-Import Bank has been closed following the expiration of its charter. But Democrats in Congress are working to revive the bank through a piece of “must-pass” legislation.

Ex-Im’s charter expired June 30, with its authority lapsing for the first time in the bank’s 81-year history. The bank can no longer process new applications, but it continues to oversee its existing financing. Additionally, those working at the bank remain employed. Conservative lawmakers and groups cheered Ex-Im’s expiration, calling it a victory for Main Street and a defeat for corporate cronyism and corporate welfare.

Democrats in the Senate, though, will likely attach Ex-Im reauthorization to legislation extending the Highway Trust Fund, which expires July 31 and has been dubbed a piece of “must-pass legislation.”

Cantwell and Graham represent states where Boeing, the bank’s biggest beneficiary, has a heavy presence.

The Senate held a test vote on Ex-Im’s reauthorization last month, and 65 senators on both sides of the aisle expressed support for the bank. More than half of the Republican senators, though, opposed reauthorization, as did Sen. Richard Shelby, R-Ala., chairman of the Senate Banking Committee.

The decision to allow an amendment reauthorizing Ex-Im to be attached to the Highway Trust Fund ultimately falls to McConnell, and opponents of the bank are urging him to follow the GOP conference.

“He controls the process,” Dan Holler, spokesman for Heritage Action for America told The Daily Signal. “Allowing a controversial amendment to be added over his stated opposition—and opposition from the chairman and a majority of his conference—would be outrageous.”

“A transportation bill should focus on transportation, not revive a corrupt federal program that put hardworking taxpayers’ money at risk to benefit some of the world’s richest corporations,” he said in a statement. “Adding Ex-Im would only make it more difficult to find a way forward on transportation because more Republicans oppose this blatant form of corporate welfare.”

Though legislation extending the Highway Trust Fund with Ex-Im reauthorization attached would likely pass the Senate—if McConnell allows for the amendment—it would face more of a challenge in the House, where conservatives led the charge against reauthorizing Ex-Im.

In the lower chamber, more than 90 Republicans oppose the bank, and both House Majority Leader Kevin McCarthy of California and Majority Whip Steve Scalise of Louisiana have come out against reauthorization. The Export-Import Bank’s charter expired June 30, and members of Congress—who are home for a week-long recess—have run out of time to reauthorize the bank. (Photo: Melissa Quinn/The Daily Signal)

In a call with reporters this afternoon, Rep. Raúl Labrador, R-Idaho, warned that attaching Ex-Im’s reauthorization to the highway bill would “make it more difficult” for the more than 40 members of the conservative House Freedom Caucus to vote for the legislation.

“We’re going to use every procedural way of trying to separate both issues,” Labrador said. “They shouldn’t be in the same bill anyway. The highway bill has nothing to do with Ex-Im.”

“Many of the leadership members have already taken a position against [Ex-Im],” he continued, “so they need to continue to hold true to that promise they made their constituents.”

Democratic lawmakers, though, are calling on House Speaker John Boehner, R-Ohio, to allow a bill extending Ex-Im’s life to go before members.

“The short-term solution is to put the reauthorization on the House floor … ” Rep. Steny Hoyer, D-Md., said in a speech in Nebraska last week. “It will pass. Period.”

While conservatives and outside groups continue working to ensure Ex-Im remains closed following its lapse in authority, another issue that could play out in the coming months regarding the bank’s operations has emerged.

Ex-Im transactions of more than $10 million require approval from its board of directors, and three of the five board members are required to take action on any such deal, Ex-Im’s charter mandates.

Of the five board members, one seat remains vacant, and two members’—Sean Mulvaney and Patricia Loui—terms expired. President Obama reappointed Loui to the board in March. However, the Senate has yet to confirm her and must do so before Sept. 10.

Additionally, a maximum of three Ex-Im board members can be of the same political party, meaning a fourth nominee must be a Republican.

According to The Wall Street Journal, McConnell typically consults with the White House on GOP appointments, and the majority leader said he plans to do so with regards to the fourth board seat.

If the Senate fails to act or blocks Loui’s appointment, the bank wouldn’t be able to back deals worth more than $10 million. The vast majority—84 percent—of financing awarded by the bank from 2007 to 2014 went to transactions requiring board approval.

Groups opposing the bank believe board vacancies shouldn’t be filled.

“There is absolutely no reason to confirm nominees to the bank’s board,” Holler of Heritage Action said. “The bank’s charter has expired and the orderly liquidation of assets can happen without Senate action on nominees.”

“Our focus is on ensuring Ex-Im stays expired,” James Davis, a spokesman for the group, told The Daily Signal. “Any effort to revive this source of corporate welfare would be a step backward for hardworking taxpayers. Ex-Im is already supposed to be working on its plan for an orderly wind down. Their board is a perfect place to start.”