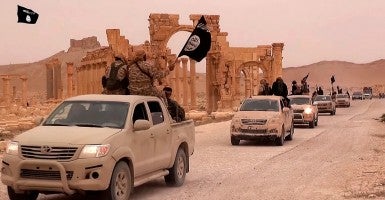 During a Senate Armed Services Committee hearing this morning, Defense Secretary Ashton B. Carter and Chairman of the Joint Chiefs of Staff Gen. Martin E. Dempsey outlined and defended the Obama administration’s strategy against ISIS.

While Dempsey believes the U.S. military response to defeat ISIS is “appropriately matched to the complexity of the environment,” Carter conceded that the execution of the Defense Department’s strategy “can and will be strengthened.”

But lawmakers are critical of U.S. training programs in the region meant to bolster Iraq’s security forces and help local Syrians join the fight.

In Syria, on the other hand, only 60 fighters have been trained in this program.

Carter claims that stringent U.S. vetting standards for fighters can be blamed for the low turnout of eligible locals.

Participants must pass counterintelligence screenings, have no history of committing atrocities and possess a willingness to engage in the military campaign in a way that is compliant with the law of armed conflict.

Regardless of the reasons for a lack of Syrian participants, Sen. John McCain, R-Ariz., called the train and equip program “anemic and suffering.”

The first priority is on the diplomatic front, with the State Department taking the lead on compelling the Iraqi and Syrian governments to become more inclusive and better support its citizens.

McCain criticized the administration for not putting a greater emphasis on military strategy.

“Security on the ground is a precondition to political reconciliation, not the other way around,” McCain said.

The administration’s military strategy centers around beating back ISIS’ attempts at having a safe haven in the region, and simultaneously building local partnerships in Iraq and Syria to enable locals to wage their own war against the terrorist group. “Enduring stability in the Middle East cannot be imposed by the outside in,” Dempsey said.

The other way the U.S. military is engaging in the conflict with ISIS is through a series of airstrikes, a tactic that has had varying levels of success.

McCain cited the statistic that of the 5,000 attempted airstrikes against ISIS, 75 percent of American pilots return to their base without ever dropping a weapon.

He sees this as a waste of resources and as a missed opportunity in pushing back the terrorist group throughout the Middle East.

Carter clarified that of the deliberate airstrikes—that is, the raids where one knows what the target will be when the aircraft embarks—there is a 93 percent success rate in achieving the objective.

However, when the airstrikes are dynamic and the aircraft is deployed without the assurance of a target, the success rate moves down to 37 percent.

McCain urged Dempsey and Carter to install U.S. air controllers on the ground in order to increase accuracy of targets hit. A member of ISIS waves its flag in Raqqa, Syria. (Photo:Stringer/Reuters/Newscom)

He specifically mentioned Ramadi, a key Sunni city in Iraq that has been seized by ISIS.

“[We have to be] making sure the Iraqi forces know that there’s no back door anymore,” Donnelly said, suggesting that Iraqis must commit their own citizens to the fight against ISIS, rather than depend on the U.S.

Although senators on the committee and representatives of the Obama administration disagreed on many aspects of the ISIS strategy, everybody at the hearing agreed that American leadership in the Middle East is a necessity.

“The global security environment is as uncertain as I’ve ever seen it,” Dempsey said.