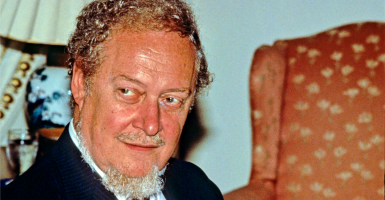 Betsy Hart is a senior writer at The Heritage Foundation.

It would go down in history as Sen. Edward Kennedy’s “Robert Bork’s America” speech.

Judge Bork, a brilliant constitutional scholar, had been nominated by President Reagan to the U.S. Supreme Court, and Kennedy, the Massachusetts Democrat who chaired the Senate Judiciary Committee, was having none of it.

Just minutes after Bork was nominated in July 1987, Kennedy took to the floor of the Senate to deliver his vitriol:

… Robert Bork’s America is a land in which women would be forced into back-alley abortions, blacks would sit at segregated lunch counters, rogue police could break down citizens’ doors in midnight raids, school children could not be taught about evolution, writers and artists could be censored at the whim of the government, and the doors of the federal courts would be shut on the fingers of millions of citizens for whom the judiciary is—and is often the only—protector of the individual rights that are the heart of our democracy … President Reagan is still our president. But he should not be able to reach out from the muck of Irangate, reach into the muck of Watergate, and impose his reactionary vision of the Constitution on the Supreme Court and the next generation of Americans. No justice would be better than this injustice.

This attack, endlessly repeated on national airwaves and in the press, defined the narrative for the nomination. It went essentially unanswered by a stunned White House and led, months later, to Bork being defeated—with six Republicans and almost all Democrats voting against him. Judge Anthony Kennedy of California instead would become the 107th associate justice of the Supreme Court.

There’s a lesson in this for conservatives today. I was just a cub communications staffer in the White House during this time, but one didn’t have to be a senior advisor to the president to know the White House by then was clearly divided along “moderate” and “Reaganite” lines, with the moderates for the most part in the ascendency and running the show.

Don’t believe the “we’re all Reaganites now” you hear from such Republicans today. Plenty of them, including many in the White House itself, never got over Reagan “usurping” the Republican presidential nomination from George Bush in 1980. They thought he was too conservative, which led to lots of battles, which, by 1987, were being won mostly by moderates.

White House officials were unprepared for Sen. Kennedy’s assaults, though they’d been warned by Democrats it would be a combative nomination. Rather than fight for its nominee, the White House let the Democrats drive the narrative. Though outside conservative groups were actively working to help Bork, they couldn’t overcome this deficit.

I remember fellow Reaganites in the communications office and elsewhere in the White House being so frustrated and angry we weren’t doing everything possible to respond to the Democrats’ vitriol and win the battle.

It just made no sense. Whether it was thinking Bork was too conservative, or being too embarrassed to go to Washington dinner parties and talk about advancing the nomination, or exhaustion over the Iran-Contra affair—which we thought at the time could be as big as Watergate—many in the White House simply gave up.

When it became clear Bork would be defeated, many White House staffers hoped he would resign his nomination and get off the national stage rather than force the Senate to vote on the record and put the White House through a public defeat. A man of incredible integrity, Bork would have none of it. He lost, 58-42.

Ultimately the result of the White House not taking principled initiative in a winnable fight, and instead letting fear and establishment politics take over, is the presence of Justice Kennedy on the Supreme Court today.

No one at the time thought backing down from fighting for Bork would lead to the calamity that Justice Kennedy has been in countless narrow decisions over the years, most recently last week.

But the White House inaction on the Bork nomination changed America.

Some Reaganites argued at the time that we should keep serving up one Supreme Court nominee after another, each more conservative than the one before, until one got through. Great idea.

Instead, after a detour through one other candidate—Douglas Ginsburg, who withdrew his nomination when previous marijuana use was discovered—the White House rewarded Edward Kennedy and the Democrats for their horrific attacks with the little-known Anthony Kennedy. He sailed through the nomination process and was confirmed, 97-0.

I remember watching these events unfold around me and being so disillusioned. But of course I never dreamed of the ramifications.

Decades later, I believe there’s important, and even redemptive encouragement in this history for conservatives in today’s turbulent and unsettling times.

Remember what the Reagan White House didn’t do for Robert Bork, and consider that we conservatives can never know when giving up, or not fully fighting even one necessary battle, will have huge, unforeseen and destructive consequences for America later.

Decades hence, I am hopeful the young conservatives of today will instead look back on these challenging times we are in and be able to say of those on the front lines now, “America is well—because they fought well.”