The Iran Nuclear Deal Deadline Is Today. Here’s What We Don’t Know. 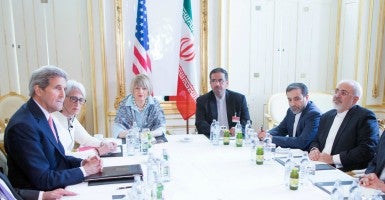 Today is the self-imposed deadline for the United States to complete a nuclear deal with Iran.

But key pieces of the deal—meant to contain Iran’s nuclear program in exchange for sanctions relief—remain in dispute as negotiators plan to extend talks beyond today’s deadline.

>>> Commentary: No Deal Still Better Than a Bad Deal on Iran Nukes

The deal between Iran, the United States and five other world powers—Britain, France, Germany, Russia and China—would create steps to prevent Iran from building a nuclear bomb and could alleviate international sanctions that have stunted Tehran’s economy.

Diplomats predict a deal could be reached within a week after the initial deadline, but negotiators planning to meet in Vienna Tuesday admit there is still much that needs to be resolved before a final agreement can be made.

Here are the four central pieces still unresolved as the deadline nears expiration:

1. Reducing Iran’s centrifuges. Iran agreed under the first negotiation framework in April it would reduce its number of centrifuges—machines that enrich uranium used in nuclear bombs—from 19,000 to about 6,000.

Iran currently uses basic centrifuges, but is researching advanced models that would purify uranium faster—accelerating the time it would take to build a bomb.

The original “framework deal” banned Iran from using advanced centrifuges for 10 years. But it was vague on the amount of research and development allowed within that timeframe. The current deal would clarify this, halting Iran’s research and development for 10 years. Iranian leader Ayatollah Ali Khamenei said last week he would not accept the restrictions, calling the demand “excessive coercion,” according to the Associated Press.

2. International inspections to assure Iranian compliance. U.S. and Western officials are skeptical of Iran’s adherence to a nuclear deal, pushing a hardline position on an agreement allowing the U.N.’s International Atomic Energy Agency to inspect military bases if suspicion arises of Iranian violations.

Khamenei repeated last week that Tehran would reject any measure allowing international inspection of its military bases. Neither side appears ready to make concessions and a failure to strike a compromise could shatter the entire deal.

“If Iran keeps Khamenei’s red lines, then no acceptable deal is possible,” said James Phillips, The Heritage Foundation’s senior research fellow for Middle Eastern affairs. “Even the Obama administration would find it impossible to accept a deal in which Iran’s military bases were off-limits for inspections.”

3. Timeline for removing sanctions. Western powers maintain sanctions will be incrementally lifted only after Iran takes certifiable steps in compliance with nuclear agreements. But Khamenei repeated last week Iran would not accept a deal unless sanctions were lifted immediately, according to the Telegraph.

“There is no way that the U.S. can afford to lift sanctions before Iran has verifiably fulfilled its obligations for taking centrifuges off-line and permitting intrusive inspections,” Phillips said. “If Tehran does not accept a gradual lifting of sanctions, then there can be no deal.”

4. Reapplying sanctions if Iran violates the deal. The West wants sanctions immediately reimposed if Iran strays from the agreement, but China and Russia refuse to concede veto powers on the U.N. Security Council. That makes automatic U.N. sanctions less likely.

Though the U.S. could reinstate its own sanctions quickly through Congress, a veto on the Security Council would prevent U.N. measures invoking “snapback,” or instant, sanctions.