Wondering Which Companies Champion Gay Marriage? There’s an App for That. 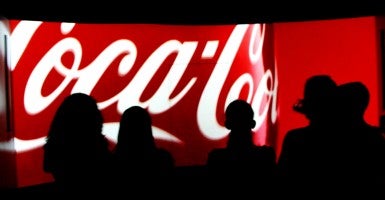 The Coca-Cola Company has long been a supporter of the LGBT community, the company says. (Photo: Aloisio Mauricio/ZUMA Press/Newscom)

Wondering where the companies you buy from stand on the gay marriage case before the Supreme Court?

Turns out there’s an app for that. It’s called 2nd Vote, and it is a free online app available on Google Play and Apple’s iTunes that allows consumers to have instantaneous access to a database that includes more than 400 companies.

It’s the brainchild of a nonprofit in Nashville that seeks to help consumers make more informed decisions about where they shop and to “follow the money” as it flows from their wallets and pocketbooks to certain political causes.

Users can look up companies individually to see where they stand on marriage or view which companies are interested in which issues.

“The 2nd Vote app provides an easy-to-use resource that allows conservatives to align their spending with their values,” says Jake DeVantier, outreach director for 2nd Vote. “The app allows members to sort by issue. By clicking on the marriage issue on the scorecard, the user can see where each corporation in 2nd Vote’s database stands on marriage.”

The 2nd Vote Marriage Values Page highlights the companies that have signed the amicus brief to the Supreme Court in defense of same-sex marriage and those that supported the Human Rights Campaign, which has lobbied to overturn state laws supporting traditional marriage. Many of the companies cited on the page, such as Coca-Cola, Starbucks, Bank of America and Microsoft, appear on both lists. “The Human Rights Campaign is the largest LGBT advocacy group in the United States, and many major corporations help fund HRC’s agenda to redefine marriage through lobbying and activism,” he says. “When Christian conservatives do business with the companies that sponsor HRC or with companies that signed the amicus brief urging the Supreme Court to overturn state marriage laws, they are helping fund same-sex marriage advocacy.”

Marriott and Hilton hotels, Citibank and Wells Fargo, and beverage producers Coca-Cola, Starbucks and Pepsi are some of the top supporters of the Human Rights Campaign, according to 2nd Vote.

The Daily Signal contacted some of the corporations 2nd Vote listed as having filed the amicus brief and as supporting the Human Rights Campaign.

Coca-Cola responded with a statement on “Marriage Equality”:

“As a believer in an inclusive world, The Coca-Cola Company values and celebrates diversity. We have long been a strong supporter of the LGBT community and have advocated for inclusion, equality and diversity through both our policies and practices.”

“The Coca-Cola Company is one of 379 businesses expressing its support for marriage equality to the U.S. Supreme Court, as laws that prohibit same-sex marriage hamper businesses’ ability to recruit and retain the most talented workforce possible. The success of our business is directly linked to the diversity of our associates as well as our consumers. As a business, it is our role and our responsibility to ensure that we embrace human rights practices in our own workplaces. It is also appropriate for us to help foster diversity, tolerance, unity and respect among all people.”

A spokesperson for Starbucks wrote in an email statement:

“Starbucks made the decision to sign onto an amicus brief filed in the Obergefell v. Hodges case to demonstrate our support for marriage equality. We have supported similar appeals in the past, including the appeal to the Supreme Court in the United States v. Windsor case. Respect and inclusion are core values of our company, and we have offered domestic partner benefits to our partners (employees) for more than two decades. From our very earliest days, Starbucks has strived to create a company culture that always puts our people first and will continue to support inclusion for our partners in the future.”

DeVantier has some suggestions for discerning shoppers who would like to take their business elsewhere.

“Alternatives that Christian conservatives making the choice to avoid funding HRC and same-sex marriage advocacy include: Dr. Pepper over Coca-Cola or Starbucks, Omni over Hilton or Marriott, ExxonMobil over Chevron or Shell, and Under Armour over Nike,” he wrote in an email message. 2nd Vote is built around a team of “old campaign opposition researchers” who pour through tax filings, public statements and financial records of political contributions as a way of tracking corporate activity, Walker said.

The group then uses this information to rank companies on the liberal-conservative continuum.

It describes each of the rankings as follows:

Liberal: Direct donations to liberal organizations, such as pro-abortion groups or gun control groups. Having liberal values in the company’s main business platform.

Neutral: Absence of any support of liberal organizations or causes. A company also can score neutral if it supports liberal and conservative causes equally.

Conservative: Direct funding to conservative groups, such as pro-life groups and pro-Second Amendment groups. Having conservative values in the company’s main business platform.