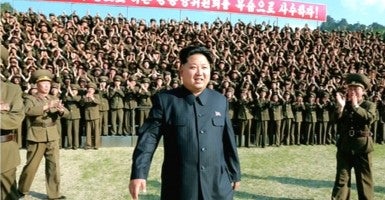 In the past Pyongyang blamed its poor crop yield on alternating claims of cataclysmic floods and droughts that left South Korea unaffected. The reality was that North Korea’s disastrous economic system was to blame, combined with the country’s mountainous geography which is not conducive to agricultural self-sufficiency. Historically, the southern portion of the Korean Peninsula was the nation’s breadbasket.

That said, current drought conditions have affected both North and South Korea. South Korean press reported rivers in several provinces are running at 60 percent of normal levels. Seed planting for water-intense crops such as cabbage, beans and scallions have been delayed in many zones.

North Korea is more susceptible to weather-related crop trauma since its centrally-controlled agricultural system never provided even minimal sufficiency levels of nutrition to the populace. The regime’s deforestation practices led to topsoil runoff.

Pyongyang is now suffering from international donor fatigue due to the regime’s repeated threats against potential donor nations, decades-long refusal to significantly reform its economy to prevent recurring requests for aid, diversion of previous aid to the military, and refusal to abide by its agreement with the World Food Program.

The mood in Washington is not ripe for increasing aid given previous unsuccessful attempts at engagement, Kim Jong-un’s belligerent behavior and the regime’s spending a large percentage of government money on the military, grandiose vanity projects and purchase of luxury goods.

According to a South Korean lawmaker, Pyongyang spent $644 million on luxury goods in 2013, several times more than it did on imported food for its needy population.

And let’s not forget that the U.N. Commission of Inquiry report concluded in 2014 that North Korea was responsible for “crimes against humanity, arising from ‘policies established at the highest level of State, including…the inhumane act of knowingly causing prolonged starvation.”

South Korea may be more willing to provide aid to North Korea as President Park desperately tries to overcome growing criticism of her administration’s lack of success after two years in office.

Pyongyang spent $644 million on luxury goods in 2013, several times more than it did on imported food for its needy population.

But Park would be constrained in providing even humanitarian largesse by Pyongyang’s unrepentant attitude toward the South. Hopes for improved inter-Korean relations at the beginning of 2015 characteristically collapsed due to Pyongyang’s growing list of poison pill conditions, threats and eventual closing of the door to engagement with Seoul. The North Korean National Defense Commission declared, “It is only too apparent that no major change or transformation could be achieved in inter-Korean relations even if we were to sit down a thousand times with such government officials.”

So, while images of malnourished North Koreans, particularly children, will pull at our heartstrings and lead to debates over providing humanitarian assistance, the blame for this tragedy must clearly be laid at the feet of the brutal systemic practices of the regime and not the whims of Mother Nature.