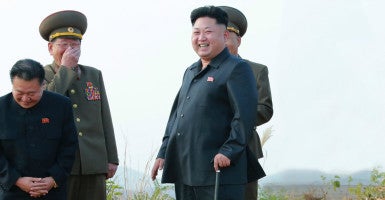 North Korea's leader Kim Jong-un has claimed that his country has developed the technology to build a thermonuclear, or hydrogen, weapon. (Photo: KCNA Xinhua News Agency/Newscom)

North Korea’s fourth nuclear test may be its most consequential, but the world is limited in how far it can escalate its response.

Though the Obama administration disputed North Korea’s assertion that it had tested a hydrogen bomb, which would be the most powerful nuclear weapon the country has ever tested, the act violated international treaties, showing that measures to rein in Pyongyang have failed.

Still, unless North Korea’s powerful backer, China, agrees to change course and strengthen sanctions in a way that hampers Pyongyang’s economy and brings the regime near collapse, nuclear experts say the the country’s young leader, Kim Jong-un, will remain undeterred.

“Basically, North Korea is committed to developing a nuclear weapons program, and we don’t have the policy tools to convince them or force them to give it up,” said Gary Samore, President Barack Obama’s former chief adviser on nuclear policy.

“If you look at the tools available and the magnitude of the problem, it can’t be resolved as long as the North Korean regime survives,” Samore continued in an interview with The Daily Signal.

“The best we can do is slow down and delay program, and I think we have done that.”

Bruce Klinger of the Heritage Foundation, who served as the CIA’s deputy division chief for Korea analysis, argues that the Obama administration is not “fully implementing” U.S. laws against North Korea.

“Obama has said North Korea is the most heavily sanctioned country in the world, and there’s not much more we can do, but that’s not true,” Klinger told The Daily Signal. “We are not making the pain strong enough for North Korea to change policy. This administration has had a policy of timid incrementalism. But under existing U.S. law, there are things we can do, because we have done them to other countries.”

Samore said Obama’s strategy to confront North Korea has been similar to those of past presidents, whose diplomatic overtures were frustrated by a regime that ignores international pressure, while the most powerful potential partner in that effort, China, has proved unwilling to take major action.

“What’s remarkable is how consistent U.S. policy has been over last three presidents, and how consistently it has failed,” said Samore, who also worked on nuclear issues in the Clinton and Reagan administrations. “We are really limited in what we can do as long as China has fundamentally different national interests.”

China, as a member of the United Nations Security Council, has veto power over any resolution put forth by that body and is especially influential in the context of North Korea because it is Pyongyang’s largest trading partner and economic provider.

In the past, China and Russia have objected to United Nations measures that could threaten the North Korean regime’s survival, such as sanctions targeting financial transactions with the country or sales of commodities like coal.

“For the Chinese, as much as they are uncomfortable with the North Korean nuclear program, their bigger fear is a collapse of the regime and unification under a government friendly to the U.S.,” Samore said. “That would weaken China’s geopolitical position. North Korea may not be much of an ally to China, but it’s better for them than the Korean peninsula being dominated by a government friendly to the U.S.”

After meeting Wednesday, the Security Council vowed to “begin to work immediately” on a resolution imposing additional measures against North Korea, and the American ambassador to the United Nations, Samantha Power, called for a “tough, comprehensive, and credible package of new sanctions.”

The Security Council has adopted four major resolutions since 2006 sanctioning North Korea for continuing to develop its nuclear weapons program and calling on Pyongyang to dismantle it.

“If you look at the last resolution [from March 2013], there are bans on the sale of certain commodities to North Korea because of their potential use for nuclear activity, and a ban on financial transfers that people believe could support the nuclear program,” Samore said. “But these are all targeted sanctions, so they are not important in influencing the overall economy. The big question is whether the Chinese would be willing to consider sanctions beyond targeted sanctions. I’d be delighted if this last test would be enough to persuade Beijing to go a bit further, but we haven’t seen much evidence of that.”

House Speaker Paul Ryan, R-Wis., on Thursday said Congress would not wait to take action of its own, with plans next week for a sanctions vote against North Korea that will likely receive bipartisan support.

Outside actions related to sanctions, South Korea is talking with the U.S. about deploying American strategic weapons on the Korean peninsula, according to Reuters.

Bruce W. Bennett, a defense analyst at the RAND Corporation focused on Northeast Asian military issues, said the U.S. is wise to consider nontraditional measures such as these.

“Part of the problem is, we usually focus on economic responses with some form of sanctions,” Bennett said. “But North Korea is largely isolated from the international marketplace and has not been affected much by U.N. actions. I think we have to ask if economic sanctions are the right approach. If we could also put political pressure on North Korea, that might change their incentives.”

If North Korea doesn’t change, the stakes are significant.

North Korea is different from Iran, another nuclear threat, in that Pyongyang already has a small arsenal of nuclear weapons, while Tehran has only ambitions to obtain one.

Some nuclear experts say North Korea could have more than 20 weapons by the end of this year.

While Samore says North Korea is “years away” from being able to deliver its nuclear arsenal into a weapon that could hit the U.S., Pyongyang has medium-range missiles that threaten allies South Korea and Japan sooner.

“This particular test, this is the fourth one, so it’s hard to get too excited,” Samore said. “But the overall trend is North Korea is seeking to develop the nuclear weapons ability to attack us. There are no questions that is the objective.”