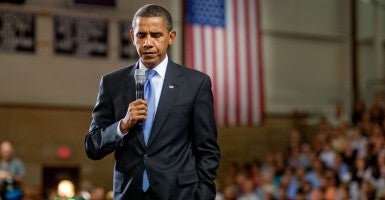 Many Republicans are watching ongoing developments in the King v. Burwell Obamacare case with trepidation. In the abstract, most recognize the opportunity such a case represents to roll back Obamacare and force a debate about real, pro-market insurance reform.

But as the decision looms, many now have second thoughts, convinced that the country will blame them for disruption in the ruling’s wake and that eventually, the only politically tolerable option will be to cave and restore the Obamacare subsidies eliminated by the Supreme Court.

That assumption is wrong, and Republicans will do more harm than good for their cause if they act on it.

According to a new poll conducted by the American Perceptions Initiative at The Heritage Foundation, the fear that Republicans, not Democrats, will take the blame for any disruption caused by the ruling appears to be unfounded. Only 36 percent of Americans will blame congressional Republicans, with 58 percent of the blame split between President Obama and congressional Democrats.

Also wrong is the presumption that most Americans will look past their general opposition to Obamacare and push for Congress to extend the subsidies to prevent disruption. A staggering supermajority—69 percent—told pollsters they agreed that “Passing new legislation to continue the Obamacare subsidies doesn’t fix the problem – it just prolongs it.”

Moreover, restoring the subsidies appears likely to shift more rather than less blame to Republicans for the situation. According to Heritage’s survey, 67 percent of Americans agree that if Republicans extend the law’s subsidies for the short term, “they will bear the blame when the time comes to take those subsidies away.”

None of this means Republicans can or should throw up their hands in despair and decline to offer a legislative response to this ruling. Indeed, Republicans can offer a path forward without accepting the premise that the Obamacare model of highly regulated and subsidized insurance is the only solution, and they can do it while offering in legislative form the clearest possible distillation of the conservative case against Obamacare: that its mandates and regulations are driving up prices for all consumers and eliminating affordable coverage options, including those now dependent on Obamacare’s federal subsidies.

As Ed Haislmaier and Drew Gonshorowski have written, mandates like Obamacare’s age rating rules, essential health benefits requirements and minimum actuarial value requirements are driving up prices for consumers across all age groups. Eliminating all of these requirements would make insurance far more affordable, particularly for the young, who have the fewest resources to purchase insurance and could see reductions as high as 44 percent in a deregulated market. In a market with more affordable coverage available to all consumers, there shouldn’t be a need for Obamacare’s massive system of subsidies.

Some have suggested a split-the-baby approach to address the ruling, proposing to renew the Obamacare subsidies in the short term and maintain them in modified form long term in exchange for concessions on Obamacare’s mandates and regulations. But this approach is both premature and politically unwise.

It is premised implicitly on an assumption that the only way to prevent massive disruption in the wake of the ruling is to legitimize the Obamacare subsidies. But even if Congress fails to act, the direst predictions of disruption vastly overstate the consequences of the ruling. Under existing law there are rules in place to help mitigate the loss of subsidies, giving Obamacare enrollees the opportunity to purchase less expensive plans.

As for committing to an alternative financing design for the long term, at this point, it puts the cart before the horse. The first step must be focused on getting rid of the bad Obamacare policies. By attaching broader insurance financing reforms, which the president will never sign, to a Burwell response bill, Republican leaders risk splintering the center-right coalition at a moment when message unity is critical. Getting rid of the source of the problem is the first and unifying objective that conservatives must rally to now. Achieving additional reforms will, of course, be essential in the long term to guaranteeing affordability for those affected by the ruling in the long term. But reform will only come after weeding out the bad policy and if we win the political argument.

And as a political matter, a response that gets Washington out of micro-managing Americans’ health insurance is more likely to rally the public to congressional Republicans’ side of the debate because it exposes the real-life problems of Obamacare. While most of the focus has been on the small number of people who are at risk of losing the subsidy, there are five times as many people facing higher costs due to Obamacare who aren’t getting a subsidy who would stand to benefit from this approach.

In contrast, presenting the president an extension of subsidies in exchange for the elimination of the costly regulations only strengthens the president’s hand. He will tell the American people that because subsidy extension is the common denominator of Republicans’ and Democrats’ demands, it is the only reasonable ground for a final compromise.

Once President Obama is positioned to make that argument, he has already won the public debate, and conservatives have lost the opportunity to educate the public on the flaws of Obamacare in the course of pursuing much needed relief for those harmed by the law.

Conservatives do themselves and the country no favors conceding that Obamacare’s illegal subsidies will need to continue in some form.

Instead, let’s keep it simple with a message that is both sound policy and sound politics: Stop pouring money into this failed program and start rolling back its overregulation of Americans’ most personal financial decisions. That’s how we turn the tide in our favor and ultimately repeal and replace the law.