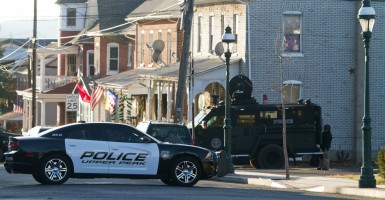 For Philadelphia law enforcement, a tool known as civil asset forfeiture has proven to be a boon to the city’s coffers, according to a new study that found $2.2 million in seized cash benefited the Philadelphia district attorney’s office.

The report from the American Civil Liberties Union of Pennsylvania examined forfeitures taking place in the City of Brotherly Love, which is known for its rampant seizures of cash and property from innocent citizens.

Additionally, through the Justice Department’s Equitable Sharing Program, which enables local and state law enforcement to share in up to 80 percent of the proceeds from forfeitures, Pennsylvania law enforcement agencies generated $10.8 million from seizures that same year.

In 2014, state agencies generated $10 million from seized cash and property through Equitable Sharing, according to the Justice Department.

“The current system doesn’t ensure that it’s actually being used against the kind of drug kingpins that forfeiture was designed to target,” Molly Tack-Hooper, an attorney with the ACLU of Pennsylvania, told The Daily Signal. “There’s no guarantee that’s actually happening today, and there’s evidence that it’s targeting people who are not guilty of any crimes.”

Civil asset forfeiture is a procedure that grants law enforcement agencies the power to seize property and money if it’s suspected of being related to a crime. Property owners, though, are sometimes never charged with a crime.

Over the years, Philadelphia has become notorious for its cash seizures. An analysis conducted by the Institute for Justice found that law enforcement took approximately $6 million per year through forfeiture between 2002 and 2012. In 2011, the city’s district attorney filed more than 6,500 forfeiture cases, and the ACLU found that the district attorney is benefiting substantially from these forfeitures.

According to the group, the Philadelphia district attorney received close to $2.2 million—7.3 percent of its budget—from forfeiture proceeds.

>>> Commentary: This Is the Moment for Civil Asset Forfeiture Reform

Additionally, the group found that cash seized came from 1,500 individuals who were never found guilty of or charged with a crime.

The ACLU, along with groups including The Heritage Foundation, the American Conservative Union and the Charles Koch Institute, are pushing for reforms to state and federal civil asset forfeiture laws. Experts argue the practice flips the presumption of innocence on its head and provides law enforcement officials with a perverse incentive to seize property.

In many cases, forfeiture victims fighting to have their property and money returned are forced to appear in court to prove its innocence. In Philadelphia, those cases are heard in City Hall’s Courtroom 478.

Through a review of 16,000 non-real-estate forfeiture cases filed between 2011 and 2013, the ACLU found that property owners challenging law enforcement to have their property and cash returned must appear in court a median of four times before their cases are decided.

If a victim misses one of the court appearances, their money or property is automatically forfeited.

For those who have had their homes or cars seized, appearing in court multiple times may be worth their while. However, the ACLU examined a random sample of 351 cash forfeitures and found that between 2011 and 2013, half of them involved amounts of less than $192. Just 10 percent of seizures were for more than $1,000.

“The bottom line is when so little cash is at stake and the deck is really stacked against property owners … they can’t even fight on principle to get their money back,” Tack-Hooper said. “The ACLU has cynically and falsely claimed the mantle of ‘innocence’ for its attack on the public safely program known as drug forfeiture,” Williams said. “Forfeiture is not a criminal process. It is a civil lawsuit, like any case in which someone is sued for causing damage to person or property.”

>>> After the Government Takes His Life Savings, This 22-Year-Old Fights for Justice

“If the perpetrator loses the lawsuit, he is not ‘innocent’ any more than the reckless driver who crashes into your car,” Williams continued.

Tack-Hooper, though, said Philadelphia’s forfeiture system isn’t functioning in the way Williams said it is.

“I don’t think the current system does a very good job of targeting drug dealers as opposed to innocent people who happen to live in the neighborhoods where drug dealers operate,” she said. “All we have is law enforcement’s word that they’re targeting the right people.”

In recent years, civil asset forfeiture has been criticized as “policing for profit,” and a number of high-profile cases have emerged involving innocent property owners who have had property and money seized by law enforcement under forfeiture laws.

In response, the Pennsylvania legislature has joined a handful of states considering legislation that would reform civil asset forfeiture laws. A bipartisan bill was introduced earlier this month that would transfer forfeiture proceeds to Pennsylvania’s general fund — as opposed to the coffers of law enforcement agencies — and require a person who has had money or property seized to be convicted of a crime.