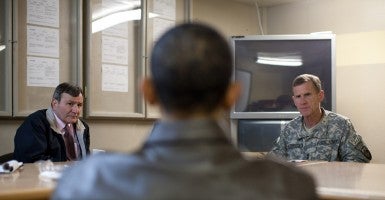 Retired Army Gen. Stanley McChrystal has penned a revealing book—but its revelations are not intentional.

The combat veteran of Iraq and Afghanistan and his team of co-authors intended to author a guide on how to use small teams to infuse organizations with dynamic and adaptive leadership. Instead they deliver an accidental exposé of what is wrong with the modern major general.

McChrystal’s book, “Team of Teams: New Rules of Engagement for a Complex World,” has, not unexpectedly, grabbed a fair amount of attention. McChrystal was a distinguished combat commander with a reputation for being tough, courageous, smart, brave, innovative and successful.

Since retiring, he has been teaching leadership at Yale University, serving on corporate boards and running a consulting group. He also authored an account of his military career in “My Share of the Task.” A résumé like that is bound to create interest in a tome on leadership.

And, let’s be honest, McChrystal’s highly publicized run-in with President Obama only adds to the anticipation. That clash came after Rolling Stone magazine published an unflattering profile of the general and quoted him criticizing the administration. It ended, promptly, with McChrystal’s resignation. People are still fascinated with the story of how that dynamic worked out.

On this matter, the book disappoints. It offers scant new insights on the McChrystal-Obama matchup. Indeed, the president rates but one, inconsequential entry in the index. This is the first warning sign that, as a leadership story, “Team of Teams” is one big opportunity lost.

Few leadership challenges are more important than understanding the meltdown in trust and confidence between a chief executive officer (such as Obama) and his chief operating officer (McChrystal) during an absolutely critical moment in operations (like the Afghanistan surge).

We know, of course, that Obama had every right to fire McChrystal. On the other hand, this incident is only one of many signs that, at the highest levels of this administration, civil-military relations have been unusually tense. Building a team of teams among senior leaders is an important task. Lessons learned from this high-profile experience would have fit nicely in the book.

While the Rolling Stone dust-up doesn’t make it into the pages of this leadership guide, plenty of McChrystal’s combat experiences do. The general’s war tribulations and his appreciation of military history are the touchstones that frame the book’s approach to leading in the modern world.

McChrystal chronicles the difficulty of adapting the thinking and activities employed in conventional military operations to the chaotic challenges facing civilian organizations. Traditional organizations, he concludes, are ill-suited to solve today’s wicked problems.

“Team of Teams” is essentially a journey of self-discovery. McChrystal finds he must learn to distinguish between “linear” problems (that are decipherable and predictable) and “non-linear” challenges (complex systems where the causes and effects that drive behaviors and outcomes are far more difficult to understand).

Hierarchical organizations can be structured to tame and manage linear problems. But non-linear problems require a different kind of leadership: decentralized, empowered, situationally aware, and adaptive. McChrystal’s solution: Leader teams that can ride the uncertainty and ambiguity like surfers skimming the crest of a wave.

Linear solutions rule problems with process and programs. Non-linear solutions figure out how to operate in the environment better than their competitors. The less linear the problem, the more the solution hinges on the people leading at the front lines, rather than on the folks developing processes and programs far away from the problem.

What “Team of Teams” champions, then, is a talent solution—and that solution is unquestionably worthy. But, as a leadership text, the ideas offered by the book are hardly novel and have been better told elsewhere.

Eric Schmidt and Jonathan Rosenberg’s “How Google Works,” for example, deftly shows how cutting-edge tech companies like Google have used this approach to ride the wave of consumer technological chaos and innovation.

What is interesting about “Team of Teams” is not that McChrystal and other Army leaders figured out the difference between mastering linear and nonlinear environments—but that it took them so damn long to do it. Rather than inform, the book prompts the question: What is wrong with the modern major general?

In framing the challenge, McChrystal reflects on the fundamental and original contributions of Frederick Winslow Taylor, the well-acknowledged father of “scientific management” and framer of how to build linear systems to solve linear problems.

But what “Team of Teams” totally misses is that, even as militaries were adapting the tools of linear management to fight World War I, they were waking up to the fact that linear tools were inadequate—even for “conventional” combat environments. The most noteworthy effort to introduce team-of-teams-type thinking into military organizations and activities occurred in the German military, which pioneered innovative tactics for breaking the stalemate of trench warfare on the Western front.

The Germans refined and expanded these innovations in the interwar years.  The real team-of-team fighters during World War II, however, were the Americans. Their success in the field resulted largely from a combination of effective small unit leadership and technical innovation at the tactical level by small independent groups. Similar adaptive behaviors can be found in other U.S. wars and military activities.

The fact that other soldiers at other times have done what McChrystal did suggests the general has not discovered new management principles for new problems. Rather, he has rediscovered a long-standing truism about leading in war and peace. Some problems are linear. Some are not. Some are a mix of both. The most successful leaders adapt to the kinds of problems they face, rather than insist problems conform to how leaders like to do business.

If the American military really is the magnificent, formidable machine it claims to be, it should be able to deliver forces that can turn on a dime and adapt to the dilemmas they face. The fact that it took so long for some of the military’s best, like McChrystal, to figure this out is not something admirable. And suggesting that they have discovered something new and important is equally dismaying.

In truth, there are many fine leaders in the military who know that the message “Team of Teams” is peddling is just good common sense. Further, they have more than enough knowledge and skills to reshape their organizations so that they can do what needs to be done. The tragedy is that they were not empowered and supported in that endeavor soon enough.

Both the military and the private sector should be seeking out, encouraging, and growing team-of-team leaders. It will give them a competitive advantage in tackling the non-linear complications that mess up the world’s black and white problems. On that score, “Team of Teams” is dead on.