Existing Law Didn’t Protect Victims From the Jacksonville Shooter. It Left Them Defenseless. 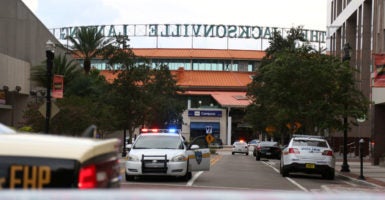 The shooter in Jacksonville, Florida, killed two people and wounded 11 before taking his own life. (Photo: Joey Roulette/Reuters/Newscom)

This past weekend, a competitor at a video game competition in Jacksonville, Florida, allegedly opened fire on fellow gamers, killing two and wounding 10 before taking his own life.

It appears that, like so many mass public shooters before him, current gun laws should have been enough to prevent him from possessing firearms. And once again, the gun laws did little more than impose barriers for law-abiding citizens, who were then left defenseless.

It’s evident that the alleged shooter has many of the traits common among mass public shooters. He comes from an extremely dysfunctional family and has a history of mental health and behavioral problems. He was a relative social outcast who, while not quite paranoid, appeared to think he was oppressed by his family and society.

He was never convicted of a crime, but had numerous interactions with law enforcement because of a tendency toward outbursts that displayed oppositional or threatening behavior. He did poorly in school and eventually dropped out of college.

It’s becoming increasingly clear that this shooting did not owe to a failure of laws on the books, but a failure to enforce existing laws.

Court documents reveal that the suspected shooter was involuntarily committed to mental health facilities on six different occasions as a teenager, spent 97 days at a Utah facility for youth with behavioral health problems, and routinely had the police called on him by his mother. Under both Maryland and federal law, the involuntary commitments were enough to disqualify him from legally purchasing or possessing firearms unless he had his rights restored.

In Maryland, having firearm rights restored involves a fairly intensive process that includes providing sworn affidavits from non-relatives and a mental health professional attesting to the soundness of the individual’s mental state. It’s highly unlikely that the Jacksonville shooter had his rights restored under Maryland law, but we don’t know for sure at this time.

And yet, according to officials, the alleged shooter was able to successfully purchase two handguns from a federally licensed firearms dealer in Baltimore in the weeks prior to the shooting, meaning he passed, at the very least, a federally-mandated background check for disqualifying criminal and mental health histories, submitted his fingerprints, and passed a firearms safety training course.

It’s still unknown whether the suspected shooter’s mental health records weren’t reported to the proper database, whether they were sealed because he was a minor when the events occurred, or whether some other mishap prevented the store from discovering through mandatory background checks that the shooter was disqualified from purchasing a firearm.

Despite the fact that it doesn’t appear the alleged shooter had a valid concealed carry permit from any state, he carried two firearms with him into the tournament area.

But none of this has stopped gun control advocates from immediately calling for stricter gun laws to be imposed on law-abiding citizens. (Activists even got #GunControlNow to trend on social media.)

Neither has it stopped certain gun control advocates from again accusing law-abiding gun owners who defend their Second Amendment rights of callously ignoring the victims.

As a legal policy analyst, the disregard of a constitutional right annoys me. As a person, the accusations of callousness sicken me.

You see, I’ve watched that gut-wrenching live stream video of the tournament, and I am overcome with emotion. I hear the panic and the fear and the disbelief. I hear the inhuman screams of the wounded and the groans of those slowly coming to terms with their injuries. I hear, I firmly believe, the unspoken prayers of the dying in their fading moments.

And my heart breaks for what I hear. It breaks for the senseless evil and the unspeakable pain of those left behind.

But my heart breaks, too, for what I did not hear—the sounds of a capable defense.

For 16 long seconds, an unhinged individual stood completely unopposed by a roomful of unarmed victims. Those 16 seconds that could have been many more, as the gunman had two handguns and extra ammunition that he apparently did not use.

It takes me four seconds to draw my firearm from its holster, locate a threat, and eliminate it. But for 16 seconds, the people in that room had nothing they could do.

In those moments, pitted against the full weight of evil, they were left defenseless. We left them defenseless. They had no armed security, no protection, and no choice. Jacksonville made it impossible for them to defend themselves by declaring Jacksonville Landing a gun-free zone, and neglecting to provide any other protection.

It turns out that these state laws and tournament rules weren’t enough to stop a the alleged shooter, a 24-year-old with a long history of mental health problems and oppositional behavior from ignoring those rules and bringing two loaded handguns anyway.

The morning after the shooting, CNN published an opinion article titled “Don’t Try to Sugarcoat the Horror of Jacksonville.” Its author gets many things wrong. He puts Second Amendment “rights” in scare quotes, as though they’re something we made up rather than an inextricable part of whole framework that ensures the liberty of a free people.

He condescendingly suggests that Second Amendment advocates merely want to protect their guns—an absurd statement, as we actually want our guns in order to protect ourselves from precisely the type of evil displayed in Jacksonville.

In an op-ed devoid of substance and reliant on emotional appeals, he accuses us of lacking empathy and failing to engage in substantive analysis out of fear for where the answers might lead us.

But in one sense, I completely agree with the author’s main point: The answer is not to sanitize suffering, but to embrace its existence.

We must embrace this reality—and then we must adequately account for it.

Roughly 100 million Americans have chosen to account for the existence of evil by arming ourselves against it, in accordance with a constitutional right that, in large part, exists in the first place as a check against evil.

This year, Americans will use their firearms for lawful defense of life and property between 500,000 and 3 million times. And while we hope the day never comes when evil rears its ugly head in our faces, we know that if it does, we might have a fighting chance.