Los Angeles Unions: Minimum Wage Hike for Thee, but Not for Me 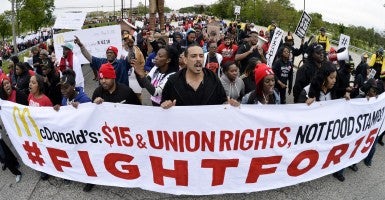 Los Angeles recently hiked its minimum wage to $15 an hour.

Los Angeles unions strongly support this move, with a catch. They want the increase to apply only to non-union companies.

At first glance this appears highly hypocritical: Unions want to require companies to pay more but do not want their members to lose their jobs as a result.

As Rusty Hicks, head of the Los Angeles Federation of Labor, told the Times:

With a collective bargaining agreement, a business owner and the employees negotiate an agreement that works for them both. The agreement allows each party to prioritize what is important to them. This provision gives the parties the option, the freedom, to negotiate that agreement. And that is a good thing.

Los Angeles unions appear to recognize the value of flexibility for their members even as they push for a law that denies it to everyone else. They don’t mind higher wages eliminating other workers’ jobs, but they want to protect their members.

This take probably underestimates Los Angeles’ unions. They have another reason to seek this exemption: It would boost their membership. An exemption would enable unions to offer businesses lower wages in exchange for unionizing.

Unions have increasingly turned to this tactic to increase their membership.

As the U.S. Chamber of Commerce documented recently, organized labor has strongly pushed for “living wage” requirements in major U.S. cities. Many of these union-backed ordinances exempt unionized companies. Unions use these exemptions to help organize and reduce costs at unionized companies. For example:

Allowing unionized companies to sidestep the minimum wage hike gives non-union companies a strong incentive to unionize. This could mean tens of thousands of new members for Los Angeles unions and millions of dollars in additional dues.

Of course, most workers don’t unionize in hopes of getting a pay cut. But unions often can ignore such objections. National Labor Relations Board rules generally require workers to wait three years before voting out a newly formed union. California also lacks a “right-to-work” law—unionized Los Angeles workers must pay dues or get fired, no matter how little they like their contract.

The government should not give special interest groups carve-outs to boost their membership. If Los Angeles unions believe that non-union employers should have to pay at least $15 an hour, that rate should apply to unionized firms too. The law should not make unions the low-cost option.