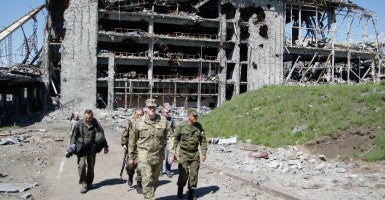 KYIV, Ukraine—Prisoner abuse, including torture and summary execution, is a daily occurrence on the battlefields of eastern Ukraine, reflecting a brutal, ongoing conflict in which both sides are accused of human rights violations and war crimes, according to an Amnesty International report released this week.

The report “provides compelling evidence of frequent and widespread prisoner abuse by a broad range of captors on both sides of the conflict,” according to a press release on Amnesty International’s website.

The report’s release comes days after the pro-Ukraine Aydar Battalion captured two Russian special forces soldiers during a firefight in eastern Ukraine. Ukraine’s treatment of the two captured Russian soldiers, who were both wounded and required medical treatment, earned praise from U.S. officials, including U.S. Army Europe Commander Lt. Gen. Ben Hodges, who said he was “impressed” by Ukraine’s handling of the prisoners.

Critics, however, have suggested Kyiv committed a war crime by displaying the captured Russians to the media.

A Join operation of the Organization for Security and Cooperation in Europe (OSCE), Red Cross and rebels was organized for finding bodies of Ukrainian soldiers, who died in fighting for the Donetsk Airport. (Photo: Newscom)

Of the 33 former prisoners interviewed in Amnesty International’s report, 17 were held by separatists and 16 by pro-Ukraine military and law enforcement units, including the Security Service of Ukraine (SBU).

The former prisoners described being beaten until their bones broke, tortured by electric shock, stabbed, hung from the ceiling, deprived of sleep for days, threatened with death, denied urgent medical care and subjected to mock executions.

“These are war crimes,” said Denis Krivosheev, Europe and Central Asia Programme deputy director at Amnesty International, speaking to journalists in Kyiv on Friday. “Torture takes place very often and is used by both sides of the conflict.”

“In the shadow of eastern Ukraine’s still smoldering conflict, our on-the-ground research shows that accounts of detainee torture are as commonplace as they are shocking,” John Dalhuisen, director of the Europe and Central Asia Programme at Amnesty International, said in a statement.

Units on both sides of the conflict disputed the report.

The Security Service of Ukraine announced Friday that it would meet with Amnesty International to discuss the report. The Associated Press reported Friday that separatist spokesman Eduard Basurin dismissed the report, citing a lack of evidence. The Russian Ministry of Foreign Affairs did not respond to a request for comment. While Amnesty International accused both sides of prisoner abuse, allegations against pro-Ukraine fighters largely focused on Right Sector, a nationalist political party and paramilitary group that originated from the Euromaidan protests in 2013 and has played a key role in many battles for the pro-Ukrainian forces.

“Using an abandoned youth camp as an ad hoc prison, Right Sector has reportedly held dozens of civilian prisoners as hostages, brutally torturing them and extorting large amounts of money from them and their families,” according to Amnesty International.

In an interview with The Daily Signal, Right Sector press officer Artem Skoropadskiy pushed back against Amnesty’s claims.

“We are neither torturing nor beating civilians,” he said. “There might be some injuries done during capturing, but not after they ended up in captivity. We forward all prisoners to the SBU. Mostly we are capturing civilians from around Peski, who are saboteurs, gun layers, spotters.”

Responding to the accusation that Right Sector was holding separatist fighters for ransom, Skoropadskiy said: “As to the blame of money extortion, that sounds funny, since most of the civilians do not have money, thus they start working for Russia for small amounts.”

Amnesty International’s allegations against the pro-Russian separatists were more wide-ranging, including summary executions of prisoners, according to eyewitness testimonies and media reports. Fighters from the Ndipro 1 Battalion sit outside a summer camp now acting as their barracks outside Volnovakha, Ukraine. (Photo: Tommy Trenchard/Polaris/Newscom)

“Amnesty has also identified at least three recent incidents where separatist fighters summarily killed at least eight pro-Kiev fighters,” the group said in a statement. “[…] In an interview with a journalist, one separatist armed group leader openly admitted to killing captive Ukrainian soldiers, which is a war crime.”

This is not the first allegation of human rights violations in the Ukraine conflict. In August 2014, Human Rights Watch said pro-Russian separatists were detaining and torturing civilians, and subjecting them to forced labor.

“Pro-Russian insurgents are regularly committing horrendous crimes,” said Hugh Williamson, Europe and Central Asia director at Human Rights Watch. “There are solid grounds to be seriously concerned about the safety and well-being of anyone held by insurgent forces in eastern Ukraine.”

“The DNR and LNR are also responsible, according to international law, although they are not a recognized state … they are responsible to avert torture,” Krivosheev said. “And people who do this should be immediately relieved of their positions. They should send a clear cut message that such behavior is unacceptable.”

“It was all pretty simple,” said the brother-in-law of an Azov Regiment soldier who was released from captivity. He spoke on condition of anonymity due to security concerns. “They called us, said what we had to pay, and gave us the wire transfer instructions. As soon as the money was sent they let him go. It was all very matter of fact.”

“The official exchange process has stopped,” Krivosheev said. “There is not one single body responsible for the exchange of prisoners. There are three separate entities on the Ukrainian side; one is a volunteer group dedicated to prisoner exchanges. It’s more chaotic on the separatist side.”

Amnesty International pushed the UN to launch an investigation, but put the onus on Kyiv to do more to crack down on war crimes and prisoner abuse, calling on the government to launch investigations into violations on both sides.

“The Ukrainian authorities must investigate all allegations of war crimes and other abuses, open files and collect evidence of abuses by separatist forces and bring to justice all those responsible for perpetrating such heinous acts,” Dalhuisen said in a statement.

“A video allegedly showing a separatist being burned alive by a Ukrainian volunteer battalion was not confirmed,” said Krassimir Yankov, a researcher at Amnesty International Ukraine. “This is an information war. There are a lot of rumors of horrors on both sides of the front.”

The ongoing U.S. training of the Ukrainian National Guard as part of exercise Fearless Guardian includes a course in the Geneva Conventions and the ethical treatment of prisoners. The ongoing U.S. training of the Ukrainian National Guard as part of exercise Fearless Guardian includes a course in the Geneva Conventions and the ethical treatment of prisoners. (Photo: Nolan Peterson/The Daily Signal)

While the accounts of torture and abuse amounted to what Amnesty International called, “serious war crimes,” the scale of the problem has not yet matched that of other recent conflicts in which human rights abuses were rampant.

“This conflict is nowhere near Yugoslavia,” Krivosheev said.

Yankov said the sample size of 33 former prisoners was sufficient to make a sweeping analysis of human rights violations throughout the conflict, but he admitted interviews with former prisoners could be flawed due to the psychological trauma of detention and abuse and the resultant distortion of memories.

“The testimony of people who were tortured is not always reliable,” he said.

According to Ukrainian media reports, which have not be independently verified, combined Russian-separatist forces may be holding as many as 400 to 700 Ukrainian soldiers prisoner.