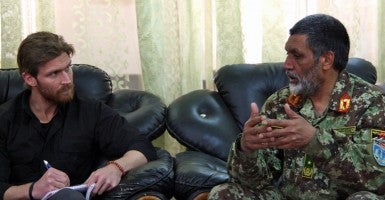 Nolan Peterson, a former special operations pilot and a combat veteran of Iraq and Afghanistan, is joining The Daily Signal as the news organization’s first foreign correspondent. Peterson will be based in Ukraine to cover the conflict with Russia.

Peterson joins a team committed to investigative and feature reporting and dedicated to covering the most important political news. The Daily Signal, the multimedia news organization of The Heritage Foundation, launched in June 2014.

The freelance journalist has covered international affairs and national security spanning the globe—from Syria and North Korea to Europe and the United States.

While serving as an officer in the U.S. Air Force, Peterson had tours at the French Air Force Academy, the U.S. Embassy in Paris, and interned at NATO Headquarters in Brussels, Belgium. He’s visited all seven continents and more than 40 countries.

“The addition of Nolan as our first foreign correspondent demonstrates our commitment to original news reporting on important stories by highly regarded journalists who are willing to pursue the truth no matter where it leads,” said Daily Signal Publisher Geoff Lysaught. “We look forward to getting Nolan’s news reports on Ukraine to The Daily Signal’s growing and highly engaged audience.” Peterson has a master’s degree in journalism from the Medill School of Journalism at Northwestern University, where he was a McCormick Foundation fellow. As part of the program’s National Security Initiative, he authored a “how-to” guide for journalists covering the military.

Prior to his work in journalism, Peterson graduated from the U.S. Air Force Academy with a degree in political science and a minor in French. He also earned a graduate degree in French from Middlebury College during a two-year fellowship at the Sorbonne University in Paris.

While serving in the military, he logged more than 250 hours of combat time in Iraq and Afghanistan.