In Ukraine, the Game and the War Go On 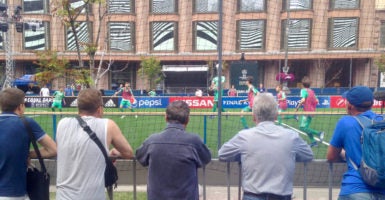 In Kyiv this week, there was little evidence that the war in the eastern part of Ukraine was escalating. (Photo: Nolan Peterson/The Daily Signal)

KYIV, Ukraine—The war in Ukraine escalated this week to its most violent levels of the year with Russian artillery and rocket attacks targeting both Ukrainian military forces and civilian settlements along the front lines in eastern Ukraine’s embattled Donbas region.

“The Kremlin controls the violence in eastern Ukraine and could bring this violence to an end tomorrow if the Kremlin wanted to do that,” Heather Nauert, the U.S. State Department press secretary, said Tuesday in Washington.

After more than four years of constant combat and two failed cease-fires, the war in Ukraine is not over. Rather, Europe’s only ongoing land war has continued a cycle of waxing and waning violence since the now-defunct Minsk II cease-fire went into effect in February 2015.

However, the physical effects of the war extend on either side of the 450-kilometer-long front lines only as far as the range of the weapons used. 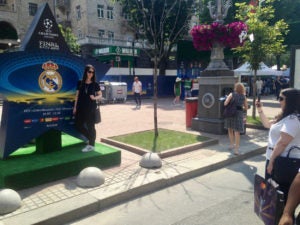 The number of foreign visitors to Kyiv increased by 25 percent in 2017. (Photos: Nolan Peterson/The Daily Signal)

In Ukraine’s capital city of Kyiv—about 430 miles northwest of the front lines—you’d never know that there was a war going on in the same country.

The Champions League final is one of Europe’s top annual sporting events. This year, the Real Madrid and Liverpool football clubs are playing, and Kyiv officials anticipated 50,000 visitors for the game. (Europeans typically refer to soccer as “football.”)

“I knew about the war, but I thought it was far enough away that it wouldn’t be a problem,” said Dave Newsham, a 47-year-old from the United Kingdom, on Friday.

Newsham was visiting Ukraine for the first time to attend Saturday’s championship game.

“It’s a lot friendlier here than in Moscow,” Newsham said, comparing his first trip to Ukraine with previous visits to Russia. “The people smile.”

The Game Must Go On

Hosting the Champions League final is a high-profile opportunity for Ukraine to showcase its capital city, as well as how far the country has come in its Western democratic evolution since the February 2014 Maidan revolution overthrew Ukraine’s pro-Russian, former president, Viktor Yanukovych.

This week, Kyiv’s city streets bustled with foreign visitors. The sidewalk cafes were filled to the brim by day, and the bars were full and open late into the night.

An inflatable soccer ball was set up on top of the empty pedestal where a statue of Vladimir Lenin once stood at Bessarabska Square in Kyiv’s city center.

Khreshchatyk, Kyiv’s main thoroughfare, was shut down to make way for a village of fan zone tents and music stages flanked by speaker towers worthy of a rock concert. For blocks in every direction, you could hear the bass thump of live performances or playbacked dance music. 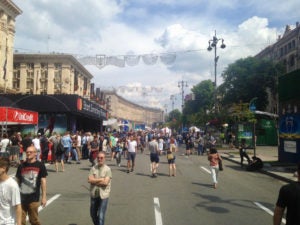 Kyiv’s central thoroughfare of Khreshchatyk was turned into a fan zone in the lead-up to Saturday’s Champions League final soccer game.

Amid the fanfare, it was easy to forget about the war. Still, among the crowds one frequently observed Ukrainian soldiers in uniform, some of whom were on leave from the war zone.

Ukrainian military veteran Andrey Zhupnik said the Champions League final could be a good opportunity to “give people hope” that life in Ukraine is “not so bad.”

“But, on the other hand,” Zhupnik added, “for the guys at the front it is unlikely to be pleasant.”

For many foreign visitors in Kyiv this week for the game, the ongoing war in the eastern part of the country was both out of sight and out of mind.

Mo Hanson, a 24-year-old from Hong Kong, was in Ukraine for the first time. He wasn’t worried about the war or his safety, he told The Daily Signal.

“I think it’s safe here,” Hanson said Friday while sipping on a beer at the fan zone in central Kyiv. “The war is invisible.”

Lee Mason, 47, from the United Kingdom, was also in Ukraine for the first time.

When asked if the war worried him, Mason replied, “Not at all.”

He added, “I knew there was a war going on, but I never gave it any consideration.”

Even if life in Kyiv is largely insulated from the war, along the front lines in the Donbas civilians and soldiers on both sides are still dying practically every day. There, Ukrainian military forces have been fighting a defensive war against a combined force of pro-Russian separatists, foreign mercenaries, and Russian regulars since April 2014.

Among last week’s casualties, on May 18, a father and his 13-year-old son were killed by artillery fire in the Ukrainian-controlled village of Troitske. The mother survived but was severely wounded, officials said.

On May 21, a 36-year-old man in Marinka—a town controlled by Ukrainian forces—was reportedly killed by a stray bullet fired from combined Russian-separatist positions. 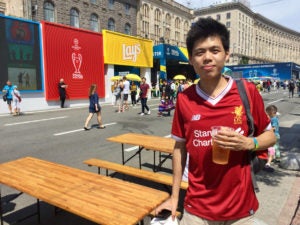 Mo Hanson, a 24-year-old visitor from Hong Kong, said he wasn’t worried about the war in eastern Ukraine.

On May 22, one Ukrainian soldier was killed in action and three more were wounded, officials said.

On Tuesday, the Organization for Security and Cooperation in Europe, or OSCE, reported that one of its surveillance drones had observed a buildup of heavy weapons proscribed by the Minsk II cease-fire in the Russian proxy-controlled village of Buhaivka in the Donbas.

The OSCE is the multinational group responsible for monitoring the cease-fire’s implementation.

“Russian and Ukrainian soldiers and civilians continue to die in a conflict manufactured by the Russian government with forces that it arms, equips, leads, and trains,” the State Department’s Nauert said Tuesday.

The Minsk II cease-fire was signed in February 2015 by the leaders of Ukraine, Russia, France, and Germany, as well as representatives from the two breakaway separatist territories in eastern Ukraine.

Russia has been a party to the cease-fire’s inception and implementation, even though the Kremlin insists Russian troops are not involved in combat operations in Ukraine.

Minsk II was dead on arrival, although combat is limited in intensity and quarantined along a static front line, according to the cease-fire’s rules. 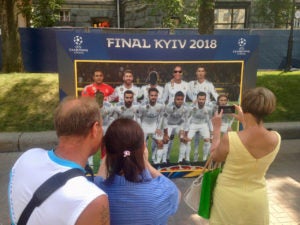 “Last week was in many ways the worst we have seen so far this year,” Alexander Hug, principal deputy chief monitor of the OSCE Special Monitoring Mission to Ukraine, told reporters Monday in Kyiv.

Near its border with Ukraine, Russia has deployed about 80,000 troops equipped with armor and artillery—a force capable of launching a rapid, large-scale land invasion, military experts say.

With Ukrainian and Russian troops already shooting at each other daily in the Donbas, Ukrainian officials do not discount the possibility of an unanticipated escalation that neither side wants—an inevitable risk due to the fog of war. 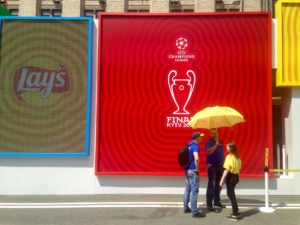 Many foreign visitors to Kyiv for the Champions League final were not concerned about the ongoing war in eastern Ukraine.

That’s why every escalatory cycle of the existing conflict, such as the one this week, poses an existential national security threat to Ukraine.

“Let Russia know that we are ready to fight back, and we keep nine grams of lead for everyone who comes to us with a sword,” Ukrainian President Petro Poroshenko said in March regarding Russia’s military posture on Ukraine’s borders.

Meanwhile, in Kyiv on Friday, the festivities continued in the lead-up to Saturday’s Champions League final.

Chris Wagenaar, a 29-year-old from New York City, was among the crowd gathered Friday in the fan zone on Khreshchatyk.

When asked if he had considered the war while planning his trip to Ukraine, Wagenaar replied, “You mean Crimea?”

This correspondent then explained the current situation in the Donbas, as well as this week’s escalation in violence.

Wagenaar replied, “Honestly, I didn’t know there was a war going on. I’d heard about Crimea, but it never dawned on me that things were still that intense.”