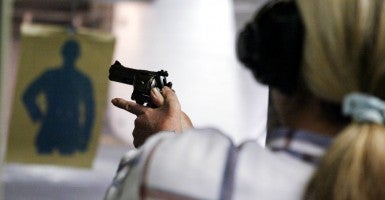 The District of Columbia has lost the latest round in the seemingly never-ending litigation over the rules it keeps implementing to restrict Second Amendment rights.

In Wrenn v. District of Columbia, federal District Court Judge Frederick Scullin issued an injunction prohibiting the District from requiring that anyone seeking a concealed carry permit demonstrate a “good reason” for needing one.

D.C. had a virtual ban on the ownership of firearms until 2008. That’s when the U.S. Supreme Court threw it out as a violation of the Second Amendment. In District of Columbia v. Heller, the Court affirmed that the Second Amendment guarantees individual Americans—not just members of a state militia—the right to bear arms.

Since then, however, the city council has tried to impose restrictive registration and licensing rules clearly intended to make it as difficult as possible to own and carry a handgun. The result has been one lawsuit after another filed against the city.

The latest iteration was over a revised carry rule that went into effect on Oct. 9, 2014.  It stipulated that the chief of police could issue a carry permit only when an applicant had:

“Demonstrated a good reason to fear injury to his or her person, which shall at a minimum require a showing of a special need for self-protection distinguishable from the general community as supported by evidence of specific threats or previous attacks that demonstrate a special danger to the applicant’s life … [or] [d]emonstrated any other proper reasons for carrying a concealed pistol, which shall at a minimum include types of employment that require the handling of cash or other valuable objects … ”

Only a handful of individuals applying for a permit have been able to receive one since the rule took effect. In fact, as the court pointed out, this provision prevents the plaintiffs “as well as the vast majority of law-abiding citizens” of the District from being able to obtain a permit because they can’t meet the “good reason/proper reason” requirement.

In his 23-page opinion, Judge Scullin systematically dismantles all of the arguments advanced by the District, noting that it leaves residents “unable to exercise their fundamental right to bear arms for self-defense under the Second Amendment.”

For example, the District cited the report of a self-serving “Committee on the Judiciary and Public Safety,” set up by the city council, that claimed the empirical evidence shows that “‘right-to-carry’ laws were associated with substantially higher rates of aggravated assault, rape, robbery and murder.” But as Scullin pointed out, that evidence is “contradicted by, among other things, the Federal Bureau of Investigation’s” own crime statistics.

The District also argued that the restrictions on concealed carry were necessary to prevent crime and protect public safety.  Scullin dismissed this argument as unproved: “Is the Court to conclude that people who do not have a heightened need for self-protection are more likely to commit violent crimes?”

The judge noted that whether an individual meets the “good reason/proper reason” requirement “does not indicate, in any way, whether that person is less likely to misuse handguns or may be less dangerous.”

Even without this restrictive provision, Scullin noted that the plaintiffs had shown that D.C. will still have one of “the most stringent handgun licensing requirements in the country, requiring not just extensive training and background checks for applicants and registration of carried guns, but the full panoply of extreme (and dubious) restrictions upon licensed handgun carriers.”

It is time for the District of Columbia’s city council, Mayor Muriel Bowser, and Police Chief Cathy Lanier to stop wasting taxpayer money in endless rounds of litigation seeking to get around the Heller decision and prevent their residents from exercising their Second Amendment rights to protect themselves and their families.

Perhaps if the city instead focused on improving the effectiveness of its law enforcement, residents might not feel such a need to protect themselves in a crime-ridden city by asserting their Second Amendment rights.