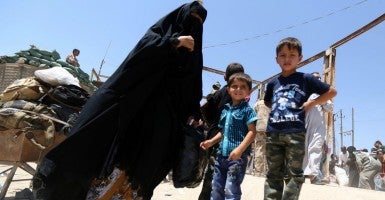 Displaced Iraqis who were forced to flee their hometowns ahead of gains made by Islamic State militants in Ramadi and elsewhere. (Photo: Ahmed Ali/EPA/Newscom)

The seizure of the city of Ramadi by the Islamic State (or ISIS) on Sunday was a major setback for the Iraqi government and for the Obama administration.

Although U.S. officials downplayed the significance of the defeat, saying that Ramadi was not “strategic” in a military sense, Ramadi is a very important political symbol because it is the capital of Anbar province, the predominantly Sunni Arab western province that has been a stronghold for the Islamic State and its predecessor organizations, ISIS and al-Qaeda in Iraq.

The panicked retreat of Iraqi police and security forces from Ramadi underscores the continued weakness of the Iraqi army and police. It also raises questions about the viability of the Obama administration’s strategy to defeat the Islamic State in Iraq.

The fact that the Baghdad government now is considering moving Shiite militias to Ramadi, a predominantly Sunni city, suggests that Iraq’s central government still lacks adequate support from Iraq’s Sunni Arabs to defeat the Islamic State, a Sunni revolutionary movement. This spells trouble for Iraqi and American plans to defeat the Islamic State.

Those plans included the building of an inclusive ruling coalition in Baghdad that would unite Iraq’s Shiite majority with the Kurdish and Sunni Arab minorities, who would contribute militia fighters to aid the Shiite-dominated Iraqi army.

Earlier this month, the first 1,000 Sunni recruits joined a pro-government Sunni tribal militia that is slated to grow to 6,000. But the arming of Sunni militias in Anbar province has been delayed by the opposition of Shiite political leaders who doubt the loyalty of many Sunni Iraqis in an increasingly polarized sectarian atmosphere.

Abadi, a Shiite political leader who promised to lead a more inclusive government, reached a deal on sharing oil revenues with Iraqi Kurds and pushed for arming Sunni tribesman to fight against the Islamic State. But Abadi’s plans to arm Sunni militias have been trimmed back by rival Shiite leaders backed by Iran, who favor the ruthless employment of Iranian-trained Shiite militias.

Now Iran’s preferred militias are building up in preparation to retake Ramadi. Their presence is likely to further exacerbate sectarian tensions which the Islamic State has exploited to gain support from Iraqi Sunnis fearful of Shiite domination.

A military victory for Iran’s surrogate militias in Ramadi would amount to a political defeat for the United States and for Iraqi Prime Minister Abadi. And such a victory could trigger a Sunni backlash that could boost the Islamic State and prolong, rather than shorten, Iraq’s civil war.