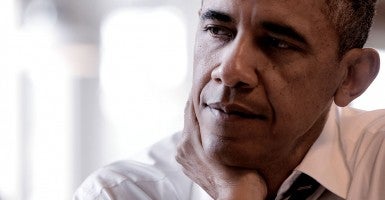 Americans’ approval of the president sunk to a new low at 40 percent according to an NBC/Wall Street Journal poll released Tuesday. Nearly half view the president negatively.

NBC cites a drop among the support of Democrats and blacks as a key reason for the decline. Obama’s weakest rating is for his handling of foreign policy, with 36 percent approving.

Obama’s dismal ratings may be fueled by mounting frustration across various issues.

Six in 10 Americans are dissatisfied with the status of the economy, while 70 percent see the country as heading in the wrong direction.

Even these numbers don’t illustrate the full range of Americans’ dissatisfaction—a meager 14 percent approve of Congress. Republican pollster Bill McIntuff, who conducted the poll along with Democratic pollster Peter Hart, predicts this number will give Republicans an edge in the midterms, although not as much as the party had in 2010 according to NBC.

This poll surveyed 1,000 adults and has a margin of error of plus or minus 3.1 percentage points.