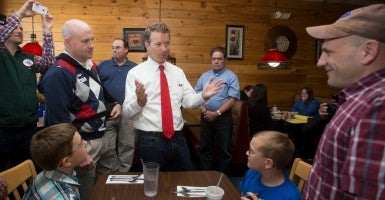 Paul, R-Ky., elaborated on his theory of government, arguing that you must have “some of it, but you don’t want too much of it.”

“The efficiency argument,” according to Paul, is that “nobody spends somebody else’s money as wisely as their own,” and that individuals are more likely to be judicious with their money than politicians in Washington, D.C.

Paul criticized Democrats and his fellow Republicans for “growing the debt” and “making the government bigger,” and accused some of his potential GOP opponents in the presidential race as not being “conservative” enough.

“I won’t mention any names” said Paul, “but he was the former governor of Florida.”

In a nod to independents, Paul said that to win purple states, Republicans not only need to attract business owners, but “the people who work for those businesses.”

The best way to do that, according to Paul, is to be the party “that stands for the whole Bill of Rights.”

Paul cited NSA spying, civil asset forfeiture and Common Core as examples of big government that his party should fight against.

Paul said that if civil liberties are not protected, than people could be targeted for the “shade of their ideology.”

He answered several audience questions on subjects like Common Core, Iran, immigration, and the Department of Veterans Affairs.

Paul said that veterans should be free to choose to receive their care from a VA facility, but should also be given the option to use vouchers at another health care provider.

During the question-and-answer session, Paul also criticized the structure of the United Nations, and said that he is “for dialogue” with the international community, but against “paying for people to attack America.”

On immigration, Paul cited Milton Friedman, who argued that a nation can’t have both an open border and a welfare state.

Paul was accompanied at the town hall event by members of the state Senate and House who have endorsed him for president, including State Sen. Andy Sanborn, R-Bedford, the co-chair of his New Hampshire campaign.