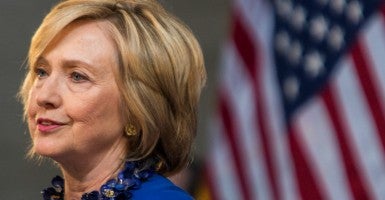 Hillary Clinton argued for “a path to full and equal citizenship” for illegal immigrants during a roundtable discussion in Las Vegas, Nev., on Tuesday.

She called comprehensive immigration reform both a “family” and an “economic” issue, and the notion of deporting 11 million people “absurd.”

Clinton argued for a path to citizenship for the family members of DREAMers, and for additional representation for “young people” and people from “vulnerable” populations, such as LGBT people, in the immigration system.

Clinton said that none of her Republican rivals “clearly and consistently” support comprehensive immigration reform, and when they discuss “legal status” for immigrants in the country illegally, it’s actually “code for second-class status.”

Clinton also pledged to fight “partisan attacks” on the president’s executive action on immigration, adding that she supports the president’s action. She said that President Obama’s executive order was within the realm of his constitutional and legal authority.

“He had to act in the face of inaction,” said Clinton.

She praised the participants who shared their stories in the roundtable discussion as “DREAMers in much more than name,” and accused her Republican rivals of wanting to “break up families” and “turn away hard workers.”

Clinton called Cinco de Mayo “an especially appropriate day for us to be having this conversation.”

“The deck is still stacked in favor of those at the top,” she said, joking that Las Vegas is a good place to “reshuffle the deck.”

The roundtable discussion at Rancho High School was part of Clinton’s first visit to Nevada as a candidate in the 2016 presidential race. Fox News reports that about 71 percent of the school’s student body are Latino.

Clinton also expressed support for raising the minimum wage at the federal level.