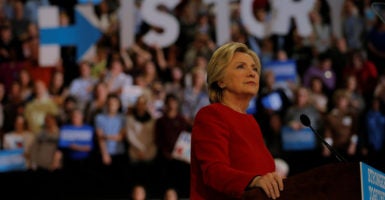 “I am proud to be joined by my fellow conservatives in the House to call for an investigation into the FBI's procedures that allowed Hillary Clinton to receive special treatment,” says Rep. Matt Gaetz, R-Fla. (Photo: Brian Snyder/Reuters/Newscom)

Conservatives are calling for an investigation of what they say was the FBI’s “special treatment” of Hillary Clinton ahead of the Dec. 7 testimony of FBI Director Christopher Wray before the House Judiciary Committee.

“I am proud to be joined by my fellow conservatives in the House to call for an investigation into the FBI’s procedures that allowed Hillary Clinton to receive special treatment,” Rep. Matt Gaetz, R-Fla., said at a press conference Wednesday. “We’ll also investigate the unprecedented bias against President [Donald] Trump that exists when we allow people who hate the president to participate in the investigations against him.”

Gaetz, who was joined at the press conference by Reps. Jody Hice, R-Ga.; Jim Jordan, R-Ohio; Andy Biggs, R-Ariz.; Scott Perry, R-Pa.; and Mark Meadows, R-N.C., called for an investigation into the FBI’s treatment of Clinton’s email use. The FBI investigation was deemed as “special,” according to FBI Deputy Director Andrew McCabe.

“Each day, we learn more information that reflects the double standard that, unfortunately, seems to be pervasive at the FBI and at the Department of Justice,” Gaetz said. A “small team” at FBI headquarters was assigned to conduct the Clinton investigation, according to emails released from McCabe, he noted.

On Nov. 15, documents were released that show McCabe “wrote an email on his official government account stating that the Hillary Clinton email probe had been given ‘special’ status,” The Hill reported.

“For me, this question is why,” Perry said at the press conference. “Why are there two different standards of justice? Why doesn’t the FBI and the Justice Department have to comply with subpoenas by the Congress for information that the American people need to have and should have and should have access to? Why is that happening?”

Hice said justice has not been impartial toward Clinton.

“This is all about, ultimately, whether or not Lady Justice is still blindfolded, and whether or not she is peeking out from underneath to show favoritism with certain individuals,” the Georgia lawmaker said. “The more we hear about how the FBI handled the investigations involving Hillary Clinton, the more we understand that she received special treatment, and that is unacceptable.”

Lady Justice wears a blindfold–and no American, regardless of wealth or political status, should be given a free pass under the law.

The Justice Department must investigate the FBI's 'special treatment' of the Hillary Clinton investigation. pic.twitter.com/NPkWuC2HuP

From then-Attorney General Loretta Lynch secretly meeting with former President Bill Clinton on an airport tarmac on June 27, 2016, to the description of how Hillary Clinton handled classified information being downgraded from “grossly negligent” to “extremely careless,” Hice said, there are many questions with no answers.

“[T]he FBI’s process and procedures that allow this type of activity to occur must come to an end. We must have justice at this point, and at the same time, we must make sure that this type of favoritism never occurs again,” he said.

Additional concerns of the lawmakers are outlined in a letter, dated Nov. 28, to Wray signed by Gaetz, along with Biggs and Rep. Louie Gohmert, R-Texas. Those concerns include questions with respect to why then-FBI Director James Comey moved Clinton’s investigation from the FBI’s Washington field office to a “small team,” and why Lynch asked Comey to refer to Clinton’s case as a “matter,” rather than an “investigation.”

Meadows, the chairman of the conservative House Freedom Caucus, called on Attorney General Jeff Sessions to get involved in the investigation.

“It is time that we get to the bottom of it, and I call on Attorney General Sessions. It is time for him to show the type of leadership to make sure the American people get the answers they deserve, because we can not allow the highest law enforcement agency in the land to actually be in a situation where they allow partisanship to determine who is actually not only guilty or innocent, but certainly we can’t allow it to happen when indeed it should be a nonpartisan, nonbiased way,” Meadows said.

Lawmakers say they want answers from Wray, who will be testifying before the House Judiciary Committee for the first time as FBI chief on Thursday.

“Tomorrow, FBI Director Christopher Wray will testify before the Judiciary Committee, and we want answers as to how we can reform our systems and practices, so that no one gets special treatment and no one is subjected to any special bias,” Gaetz said.