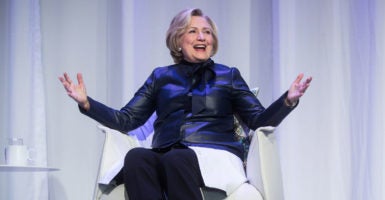 What happened? (Get the pun?)

According to Clinton’s remarks March 11 at the India Today Conclave in Mumbai, there are certain pressures women in the Republican Party face from their male oppressors.

“We do not do well with white men and we don’t do well with married, white women,” Clinton said at the conference. “And part of that is an identification with the Republican Party, and a sort of ongoing pressure to vote the way that your husband, your boss, your son, whoever, believes you should.”

“Stop pretending you’re a feminist,” Conway said. “This is very representative how bitter and ungracious many have become in this country, frankly, and, but you know what? Keep rolling the tape. So many Democrats just want her to stop. And I’m sure so many Republicans want her to continue.”

HRC says white women voted for Trump because their husbands, bosses, sons told them to. @ the India Today Conclave this weekend.

“I won the places that represent two-thirds of America’s gross domestic product,” Clinton said during her on-stage with India Today’s editor-in-chief, Aroon Purie. “So I won the places that are optimistic, diverse, dynamic, and moving forward. And his whole campaign, ‘Make America Great Again,’ was looking backwards.”

Clinton said President Donald Trump’s message to voters was “you know, you didn’t like black people getting rights, you don’t like women, you know, getting jobs. You don’t want, you know, to see that Indian American succeeding more than you are.”

Here’s a roundup of 13 tweets that showcase the views of the “deplorables” who were not impressed with Hillary Clinton’s interview or her graceful stair descent.

She still thinks so much of herself and so little of half the country.

She was never sorry for calling us “deplorable” & “irredeemable” – she was sorry for getting caught. https://t.co/8bLwpAgeV8

“WORSE THAN DEPLORABLE”: @michellemalkin hits back at Hillary Clinton for implying Trump voters are ‘backwards’ pic.twitter.com/PsMCo0YHzo

I am thinking my reporting was pretty darn accurate about the voters picking up these underlying sentiments from her and voting against her https://t.co/OkRBb3v8Ae

Democrats view you as backwards, gun-clinging, God-fearing people. They despise you. https://t.co/HbAPeaKJcH

#CrookedHillary is still whining. Her white privilege card declined. Turns out her credit with working class people was no good, and from the sounds of this, her account has been terminated. #maga ?? https://t.co/wWZHwGQ0u5

Hillary has said this before and Michelle Obama said similar: https://t.co/3Ktcyjtc6a It is a full on talking point that women who don’t think in lockstep with them are brainwashed. https://t.co/4Ou16qv2D0

Since everyone in America is sick of hearing Hillary Clinton still complaining about losing the election, she’s now doing it in India! ? pic.twitter.com/QaTS9Kpw2I

Since Americans are tired of listening to Hillary’s reasons for losing to President @realDonaldTrump, she had to go to India to sell it. https://t.co/LBN9BiOgpm

We dodged a bullet, America. ??

Hillary Clinton: "We don’t do well with married, white women. And part of that is an identification with the Republican Party, and a sort of ongoing pressure to vote the way that your husband, your boss, your son, whoever, believes you should.”

I'm a married, white woman and I can guarantee you I didn't lead Michigan to victory for @realDonaldTrump because a man told me to. https://t.co/IyTmd5EYhE pic.twitter.com/GsUTdWE3A4