Anyone Can Be a Good Parent. That Doesn’t Mean We Should Redefine Marriage. 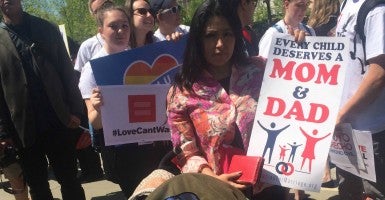 Sara Baquero stands outside the Supreme Court, where she traveled with her family, on Tuesday. (Photo: Ellie Silverman/McClatchy DC/TNS/Newscom)

Justice Anthony Kennedy’s principal concern about Michigan’s defense of its man-woman marriage laws during Tuesday’s oral argument appears to rest on a simple misunderstanding of that defense.

Michigan’s counsel, John Bursch, had pointed out that removing the man-woman definition of marriage would reduce the institution’s focus on procreation and, hence, children. Consequently, public understanding of the institution would become more adult-centric and less child-centric. Kennedy then suggested that his prediction assumes “that same-sex couples could not have the more noble” child-centric purpose in seeking the right to marry.

But Michigan’s defense—and that advanced by the other states and most of the scholars who submitted briefs in the case—does not rest on such an assumption.

To the contrary, what I have called the “institutional” or “ecosystem” defense of man-woman marriage—essentially the defense that Michigan has advanced—has nothing to do with the strengths or shortcomings of same-sex parents, much less their commitment to the children they may raise together.

The point, rather, is that transforming marriage from an inherently gendered institution into a genderless “any-two-adults” institution removes its implicit focus on children. Such a legal and social transformation compromises the institution’s child-centered social norm—what Kennedy has called the law’s “teaching function”—for the entire population. And that is especially important for heterosexuals, who produce the vast majority of children.

That kind of compromise has already happened once—when no-fault divorce pushed the institution of marriage more toward the wants of adults and away from the needs of children, and in the process severely eroded the norm of permanency that had been a vibrant feature of marriage.

So too here: Jettisoning the millennia-old man-woman definition to accommodate the desires of adult same-sex couples sends a message to society that marriage is primarily about adult interests. And that is true even if, as Kennedy correctly assumes, large numbers of same-sex couples would later both aspire to and achieve the child-centric vision.

Moreover, two subsidiary social norms that flow from the man-woman definition would be eliminated or drastically diluted by mandating same-sex marriage.

First, marriage has long contained a gender-diverse parenting norm—children are best off when raised by a mother and a father since there are basic biological and behavioral differences between how men and women interact with and love their children. These differences complement each other.

Indeed, it is by being raised in a home with a mother and father that children ordinarily learn how to interact with adults of both genders. As famed anthropologist (and atheist) Margaret Mead put it,

[o]ne of the most important learnings for every human child is how to be a full member of its own sex and at the same time fully relate to the opposite sex. This is not an easy learning; it requires the continuing presence of a father and a mother …

The man-woman definition of marriage subtly but powerfully reminds society of the need for “the continuing presence of a father and a mother.” By the same token, removing that definition in favor of an “any-two-adults” definition weakens if not destroys that message, that is to say, that children need both a mom and a dad.

Second, the man-woman definition has long conveyed the subsidiary norm of biological connectedness—that not only do children long for a relationship with the mother and father who gave them life, but that they do best (on average) when raised by those biological parents joined together in marriage.

Like the gender-diversity norm, the biological connection norm encourages men and women who choose to procreate together to stay together for the benefit of their children.

A forced transformation of marriage from a man-woman institution to an “any-two-adults” institution would likewise eviscerate this norm. And, especially for those who have no alternative source for that norm, such a transformation would reduce the social pressure to marry. And children would suffer as a result.

For millennia, the social norms of child-centricity, gender-diverse parenting and biological connectedness have flowed from the man-woman definition of marriage. This has benefited untold billions, including the nine justices on the Court. The next generation deserves the opportunity to achieve those same benefits.

The decision of how to define marriage should rest squarely on the shoulders of the American people, for it is they who will have to bear its consequences.