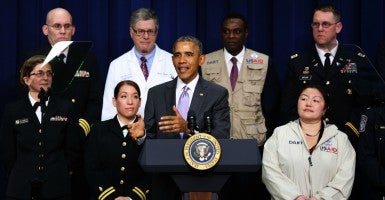 President Obama delivered remarks in February on the response to the Ebola outbreak. (Photo: Aude Guerrucci/Polaris/Newscom)

A year after the Ebola outbreak began in West Africa, the Obama administration has yet to publicly assess its response to the crisis. Given the inaction by the administration, a task force I co-chaired undertook an independent review and recently published our findings as a Heritage Foundation special report: “The Ebola Outbreak of 2013–2014: An Assessment of U.S. Actions.”

Together with James Carafano, the E.W. Richardson fellow at The Heritage Foundation, Charlotte Florance and a cadre of experts, we examined the U.S. government’s response, both here and in Africa, and found numerous areas requiring action, from public health preparedness to crisis communications. Among our report’s recommendations was that the Obama administration undertake its own public review of the Ebola response as the George W. Bush administration did after Hurricane Katrina.

In the aftermath of Hurricane Katrina, President Bush directed the Homeland Security Council staff to conduct a comprehensive review of the federal government’s response. As a member of that staff, I was assigned full-time to this review and spent several months with a team drawn from federal departments and agencies to review the response. What followed was a public report, “The Federal Response to Hurricane Katrina: Lessons Learned,” with 125 specific recommendations.

For the Ebola response, the Obama administration has chosen a different tack. Rather than acknowledging any shortcomings in its response (much less actionable steps to address the issues), it has sent the ineffective Ebola czar back to the private sector and closed up its White House-directed effort.

When one fails to learn lessons, mistakes are repeated. Soon after President Obama assumed office in 2009, he shuttered a White House office focused on bioterrorism and pandemic policy established by Bush. Just a few months later, the H1N1 flu led to a hasty recall of many of the previous office’s experts to manage that crisis.

But the Bush-era office never was formally reconstituted, so the administration again was unprepared when Ebola struck. And now, even after a second major public health crisis on his watch, Obama still refuses to re-establish an enduring White House effort focused on public health threats.

If the Obama administration will not adopt our recommendations, we offer our report to his successor in the hope the nation will be better prepared the next time around. But given that another crisis could be just around the corner, a strategy of wishful thinking leaves all of us vulnerable in the meantime.

We discussed the report at a recent Heritage event here.