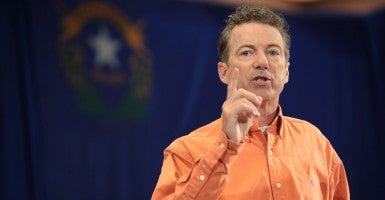 Paul said he wants to find solutions to the problems facing the nation rather than simply complaining about them.

In addition to making his pitch to Republican activists at the First in the Nation Summit hosted by the New Hampshire Republican State Committee, Paul said his potential Democratic opponent Hillary Clinton is guilty of a “dereliction of duty” during her time as secretary of state.

He added that the loss of four lives in the attacks on the American consulate in Benghazi “should ever preclude her from holding higher office.”

Paul said some in the GOP want to “dilute” the message of Republicans and become “Democrat-lite.”

“I think what we need to do is be boldly for what we are for,” said Paul.

“To win these purple states that aren’t so easy anymore, I think we need to be the party that defends the whole Bill of Rights,” said Paul.

Paul also criticized elements of the Republican Party he feels are too eager to take military action.