17 Things Hillary Clinton Says She Would Change About the Economy 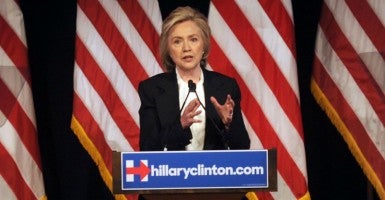 “I will offer plans to rein in excessive risks on Wall Street and ensure stock markets work for everyday investors,” @HillaryClinton says.

Clinton, seen as the front-runner for the Democratic nomination, used her appearance earlier this week at the New School in New York’s Greenwich Village to outline an economic message organized by what she called “strong growth,” “fair growth,” and “long-term growth.”

“We can’t create enough jobs and new businesses without more growth, and we can’t build strong families and support our consumer economy without more fairness,” she said, adding:

The defining economic challenge of our time is clear: We must raise incomes for hardworking Americans so they can afford a middle-class life,” she said. “We must drive strong and steady income growth that lifts up families and lifts up our country.

Much of what Clinton advocated Monday—from family-friendly leave to equal pay for women—reflected familiar liberal or progressive goals, including tweaks of programs installed by President Obama.

Here are 17 specific things the former first lady and secretary said she would do if she returns to the White House as president: