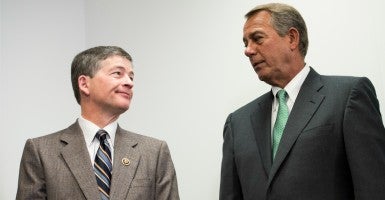 With Republicans divided over the Export-Import Bank, the agency’s future could come down to a secret vote cast during a closed-door meeting.

The House Republican Conference is expected to gather within the next few weeks to hold a private vote on whether to reauthorize the controversial bank, Heritage Action for America, the sister organization of The Heritage Foundation, revealed Thursday. Ex-Im’s charter expires June 30.

If a majority of the GOP favors reauthorizing the bank, Speaker John Boehner would allow a floor vote on a bill extending Ex-Im’s life. The practice, known as the “Hastert rule” for former Speaker Dennis Hastert, ensures a majority of the House’s majority party supports the bill.

News of the secret vote comes as lawmakers debate whether to reauthorize the 80-year-old agency. It also prompted a sharp rebuke from a group opposed to the bank.

“Heritage Action commends those lawmakers opposed to reauthorizing this taxpayer-backed bank, but its future should not be decided by a secret ballot,” said Michael Needham, Heritage Action’s chief executive officer. “Silence perpetuates the status quo and empowers the well-connected special interests in Washington. Constituents deserve to know if their representative stands with Barack Obama and Elizabeth Warren or with conservatives all across the country.”

GOP lawmakers are split on whether the bank should continue to exist. Supporters of the bank, such as Republican Rep. Stephen Fincher of Tennessee, believe the bank helps small businesses compete in the global market. Proponents also argue Ex-Im creates new jobs in the United States.

Fincher introduced a bill in January reauthorizing the bank for another five years. The legislation also calls for a series of reforms, such as mandatory annual audits from the Government Accountability Office and reduced taxpayer exposure.

Sixty Republicans have signed on as co-sponsors of the bill, signaling their support for the Export-Import Bank.

Meanwhile, opponents, led by House Financial Services Chairman Jeb Hensarling of Texas, believe Ex-Im serves as an engine of cronyism and corporate welfare. Hensarling’s committee has jurisdiction over the bank.

According to records compiled by Heritage Action, 74 GOP House members have publicly voiced their opposition to the bank.

Historically, lawmakers on both sides of the aisle voted to reauthorize the bank with little fanfare and debate. However, its existence has proved more contentious in recent years as the bank has come under fire for primarily supporting large, politically connected companies such as General Electric, Caterpillar and Boeing.

Hensarling hasn’t yet said whether he will allow a bill reauthorizing Ex-Im to move through his committee, and Democrats on the panel criticized the chairman during a joint hearing with the Oversight and Government Reform Committee yesterday for not scheduling more official hearings on the issue.

Michael Steel, spokesman for Boehner, told The Daily Signal he wasn’t aware of a meeting with GOP members about the future of the bank and wouldn’t say whether leadership would bring a reauthorization bill directly to the floor.

“Members are continuing to have discussions led by Chairman Hensarling and members of his committee,” Steel said.

Though it’s unknown how legislation reauthorizing the bank will progress through the House, if at all, a bill extending the bank’s charter has more certainty in the Senate.

In an interview with USA Today, Senate Majority Leader Mitch McConnell said he wouldn’t block a vote to reauthorize the bank.

“I think it probably enjoys a majority in the Senate, and I don’t think we should deny it the opportunity to be voted on,” he said.

McConnell does not support Ex-Im’s reauthorization.