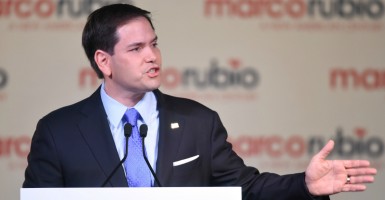 Announcing his candidacy for president in his hometown of Miami, Sen. Marco Rubio this evening underlined a generational divide between himself and Democratic favorite Hillary Rodham Clinton and depicted the coming campaign as one to reach a better future and not rehash the past.

“Yesterday is over and we are never going back.”—@marcorubio

“Now, the time has come for our generation to lead the way toward a new American Century,” the Florida Republican said, adding: “This election is not just about what laws we will pass. It is a generational choice about what kind of country we will be.”

Clinton, 67, announced her long-expected bid for the White House with a video released Sunday. Without naming her, Rubio, 43, depicted the former first lady and secretary of state—and perhaps some of his GOP rivals—as old news.

“Yesterday is over,” Rubio said, “and we are never going back. We Americans are proud of our history, but our country has always been about the future.”

That declaration was an ironic if unintentional echo of Bill Clinton’s 1992 presidential campaign theme song, Fleetwood Mac’s “Don’t Stop (Thinking About Tomorrow).” Its lyrics include the refrain “Yesterday’s gone, yesterday’s gone.” Rubio is younger now than both Clinton and her husband were then.

I just recorded this quick video on my phone. Thank You all for the awesome support. pic.twitter.com/4dfOG5oQ6U

>>> Related: Rubio Runs for President on America’s Place in the World

Addressing an overflow crowd at Freedom Tower, which processed tens of thousands of Cuban immigrants in the 1960s and ’70s, Rubio declared his candidacy at 6:13 p.m., 10 minutes into his 17-minute speech. (Here is a transcript and a video.)

He again told his family story in sketching out a vision of the imagination and innovation needed to restore America after what he depicted as Barack Obama’s failed presidency. His father and mother left pre-revolution Cuba in the mid-1950s to find freedom, work hard as a bartender and maid, respectively, and rise to the middle class in America.

“For almost all of human history, power and wealth belonged only to a select few. Most people who have ever lived were trapped by the circumstances of their birth, destined to live the life their parents had,” an emotional Rubio said. “But America is different. Here, we are the children and grandchildren of people who refused to accept this.

“My parents achieved what came to be known as the American Dream,” he said, adding:

But now, too many Americans are starting to doubt whether achieving that dream is still possible: Hardworking families living paycheck to paycheck, one unexpected expense away from disaster. Young Americans, unable to start a career, a business or a family, because they owe thousands in student loans for degrees that did not lead to jobs. And small business owners, left to struggle under the weight of more taxes, more regulations and more government.  …

Why is this happening in a country that for over two centuries has been defined by equality of opportunity?  Because while our people and economy are pushing the boundaries of the 21st century, too many of our leaders and their ideas are stuck in the 20th century.

Rubio is an advocate of tax, regulatory and education reforms that will spur jobs and lift incomes in an increasingly technology-driven economy. He will detail an ambitious, family-friendly tax measure with co-sponsor Sen. Mike Lee, R-Utah, in an appearance at noon Wednesday at The Heritage Foundation. His speech this evening touched on his defense of religious freedom and his pro-life, pro-family views.

Rubio is younger than every other major-party presidential hopeful except Louisiana Gov. Bobby Jindal, a fellow Republican who is about two weeks his junior. In declaring this evening, the Miami native became the third nationally known Republican to formally enter the race, following two fellow first-term senators, Ted Cruz, 44, of Texas and Rand Paul, 52, of Kentucky.

Two GOP rivals who are ahead in early polls, Wisconsin Gov. Scott Walker, 47, and former Florida Gov. Jeb Bush, 62, are expected to announce in coming weeks.

Cruz, Paul and Rubio—along with Lee, who is not making a run for the White House—all came to Washington as a result of the 2010 election with passionate support from tea party activists who embraced the Constitution’s emphasis on individual liberty and limited government.

“Before us now is the opportunity to author the greatest chapter yet in the amazing story of America.”–@marcorubio

“I believe that Marco is still one of us,” Billie Tucker, a leader of Florida’s First Coast Tea Party, said in a telephone interview with The Daily Signal hours before Rubio’s announcement, noting his consistent appeal to “American values.”

Tucker acknowledged that many fellow tea party conservatives remain angry with Rubio for co-sponsoring legislation that would result in “amnesty” for millions of illegal immigrants, although he later said that was a mistake given the lack of trust in government to secure the border and enforce the law.

“He will have some people who will never forgive him,” Tucker said, stressing that she was speaking for herself. “I still trust Marco. … I’m going to get all kinds of crap about that, but I don’t care.”

Other excerpts from Rubio’s remarks:

“At the turn of the 19th century, a generation of Americans harnessed the power of the Industrial Age and transformed this country into the leading economy in the world. And the 20th century became the American Century. Now, the time has come for our generation to lead the way toward a new American Century.”

“Before us now is the opportunity to author the greatest chapter yet in the amazing story of America. We can’t do that by going back to the leaders and ideas of the past. We must change the decisions we are making by changing the people who are making them.”

“In many countries, the highest office in the land is reserved for the rich and powerful. But I live in an exceptional country where even the son of a bartender and a maid can have the same dreams and the same future as those who come from power and privilege.”

CALLING ALL CONSERVATIVES WITH A CAN-DO ATTITUDE! Check out our new website – http://t.co/KOVpWfj3ef pic.twitter.com/h6mlJAaZwU