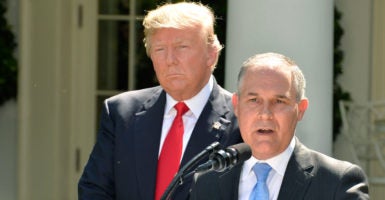 President Donald Trump will continue to target duplicative and ineffective regulations as part of his administration’s “spring agenda,” the White House announced Wednesday.

Trump’s reform agenda will cut across many areas and top priorities for deregulation include infrastructure development, emerging technologies, and “relief for small business,” a senior White House official said during a conference call coinciding with the announcement.

The senior official cited Trump’s previous executive order directing all government agencies “to repeal at least two existing regulations for each new regulation issued in [fiscal year] 2017 and thereafter.” In many ways, the official said, the administration’s spring agenda is an extension of that order.

Diane Katz, a senior research fellow in regulatory policy at The Heritage Foundation, credited the Trump administration for working to alleviate the burdens of government regulation.

“Release of the spring agenda provides further evidence that the Trump administration remains committed to regulatory reform,” Katz said in an email Wednesday to The Daily Signal. “It is indeed a relief that the drawbacks of excessive regulation are now recognized after eight very long years of unconstrained expansion under President Obama, who increased annual regulatory costs by $120 billion.”

Nick Loris, an economist at The Heritage Foundation who specializes in energy and environmental policy, said he is particularly keen on the Trump EPA’s efforts to curtail regulations associated with so-called New Source Review and its impact on power plants.

New Source Review is a rigorous permitting process for construction of new power plants that has the stated purpose of protecting air quality.

“I’d say that any attempt to roll back NSR is an important step in the right direction both for the economy and the environment,” Loris said in an email to The Daily Signal.

The process, he said, “is an unnecessary obstacle that stifles new investment that would not only create jobs [but] decrease operating costs for power plants and also reduce emissions.”

What constitutes a ‘major modification’ is unclear despite multiple administrative attempts to clarify. The confusion and discouragement of investment to improve plant operations, and thereby reduce pollution, illustrates the need for the EPA to act.

A White House backgrounder outlines some of the administration’s top priorities.

One action item affecting small businesses and municipalities calls on the Interior and Commerce departments to allow for revisions to implementation of the Endangered Species Act.

In a priority for the EPA, the administration expects to provide a clear, nationwide policy on the blending of fully treated and partially treated wastewater, an action the White House says could result in “considerable cost savings to municipalities without jeopardizing public health or environmental protection.”

And on infrastructure, plans call for agencies to advance several initiatives such as:

—Modification of Nationwide Permits. This effort to review nine general permits relating to energy independence could save the public significant time and money by reducing certain obligations under the Clean Water Act. (Department of Defense, Army Corps of Engineers)

During the conference call, the senior White House official said the agenda will emphasize the need for greater “transparency” in government and “due process for the public.”

As the White House introduced the new deregulation agenda, Pruitt played host to more than 80 “partners” in the EPA’s Smart Sectors program, which brings together representatives from areas of the economy that fall under the agency’s regulations.

Among those participating in more than 175 meetings and site visits so far were representatives of industries such as chemical manufacturing, aerospace, construction, oil and gas, ports, iron and steel, automotive, and agriculture, according to an EPA press release.

“This latest regulatory agenda reflects the Trump administration’s commitment to reducing unnecessary regulatory burdens,” Pruitt said, adding: “EPA is advancing this agenda by listening and working in partnership with the regulated community to improve environmental protections for the American people while also promoting economic growth.”

Portland Cement Association President and CEO Mike Ireland was one of several partners who offered his perspective.

“The Smart Sector program has been a game-changer for our dialogue with EPA on pragmatic and effective environmental protections,” Ireland said. “The cement industry is committed to finding creative ways to reduce our environmental footprint while continuing to provide a resilient and cost-effective building material to support our nation’s infrastructure needs.”

A quote from Diane Katz in this article has been corrected to reflect the true increase of annual regulatory costs under President Obama.