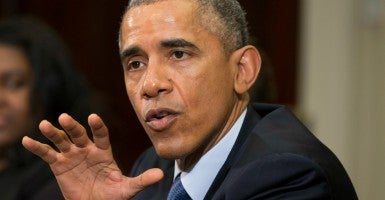 News flash to the legal academy: No, President Obama can’t refuse to implement an (at this point purely conjectural) adverse ruling by the Supreme Court in King v. Burwell. That wouldn’t be merely “bypassing” the Supreme Court. Such an action would constitute defying the Court.

Neither the Constitution nor prior court decisions would allow the administration to do that. And though Obama has seemingly decided that his presidency is not bound by the laws passed by the legislative branch, he has—thus far at least—not suggested that he is exempt from adverse rulings from the judicial branch.

Yet University of Chicago law professor William Baude recently claimed in the opinion pages of The New York Times that Obama could effectively ignore the Supreme Court if it rules in favor of the four Virginians challenging IRS regulations that extend tax-credit subsidies to coverage purchased through Obamacare’s federal health insurance exchange.  Baude asserts that the administration could just apply the ruling to the four plaintiffs, “refusing to extend the Supreme Court’s reasoning to the millions” of others affected by the IRS rule in question, but who “did not sue” the government. He could not be more wrong.

The Obamacare provision at issue authorizes premium tax credits for health insurance purchased through an exchange “established by the State,” and not the exchange established by the federal government that operates in states that refuse to establish their own exchanges. One of the architects of Obamacare, Jonathan Gruber, has said that this difference was deliberately inserted into the statute to give state governments an incentive for establishing their own exchanges. This proved to be a political miscalculation, as a majority of the states decided not to set up exchanges.

The IRS, however, extended the tax credits to the federal exchange by interpreting “State” to mean “federal government,” a reading that defies common sense and the normal rules of statutory interpretation.

Putting an imaginative spin on an unfavorable outcome for the administration, Professor Baude claims that the Constitution would allow the administration to apply the judgment only to the four plaintiffs and otherwise ignore the ruling for the rest of the nation. His rationale: “The King litigation is different, because almost everybody who is eligible for the tax credits is more than happy to get them.” Yet whether or not folks are “happy” about a particular regulation has no bearing on whether that rule is authorized by law.

Baude claims that the administration is “free to follow its own honest judgment about what the law requires.” But if the Supreme Court holds that the IRS rule violates federal law, it wipes out the IRS rule in its entirety. Baude raises the fact that President Lincoln ignored the Supreme Court’s ruling in the infamous decision Dred Scott v. Sandford. Yet this is a red herring. The King case is not about the separation of powers or the relationship between co-equal branches of government—it is simply a matter of statutory interpretation.

Baude also makes the odd claim that such behavior by the administration “would not defy a Supreme Court order, since the court has the formal power to order a remedy only for the four people actually before it.” Again, that is simply not the case. If the Supreme Court holds that a particular statute is unconstitutional on its face or that a particular regulation was improperly issued by a federal agency, that ruling applies in all circumstances in which that statute or regulation was or could be applied—not just to the particular plaintiff in front of the Court unless the Court specifically limits its ruling to the plaintiffs before the Court.

In fact, the Court rejected Baude’s legal theory in Cooper v. Aaron, when it determined that officials in Arkansas were bound by the holding of Brown v. Board of Education even though only Delaware, Kansas, South Carolina and Virginia were the named parties in Brown. Obviously many students and school administrators were, at the time, unfortunately “happy” with segregation; that doesn’t mean the states that weren’t parties to the case could ignore the Court’s ruling in Brown.

This issue already came up in another Obamacare subsidies case, Halbig v. Burwell, before the U.S. Court of Appeals for the D.C. Circuit. As the Halbig plaintiffs pointed out, “[T]his Court has made clear that when it invalidates a regulation under the [Administrative Procedures Act], such a ruling has ‘nationwide’ effect, for ‘plaintiffs and non-parties alike.’”

Baude’s legal theory also ignores the Anti-Deficiency Act, which makes it a crime for a federal employee to spend funds without congressional authorization. Thus, if the Supreme Court rules that Congress did not authorize subsidies for the federal exchanges, and if the Obama administration continues to pay out these subsidies, every federal official involved in making such payments could be fined or even imprisoned.

Baude seems to be urging Obama to copy President Andrew Jackson’s shameful response to Worcester v. Georgia, in which the Supreme Court ruled that Georgia violated a federal treaty when it sought to regulate the Cherokees. Jackson allegedly responded, “[Chief Justice] John Marshall has made his decision, now let him enforce it,” leading to the infamous Trail of Tears when the Cherokees were forced out of their ancestral homelands.

Let’s hope Obama doesn’t take this legal advice to channel Old Hickory and taunt Chief Justice John Roberts in such a way. Though the administration has shown contempt for the rule of law, it has not yet stooped to the level of ignoring a decision by the Supreme Court.