Angry at Netanyahu, Obama Administration May Stop Defending Israel at UN. Why They Shouldn’t. 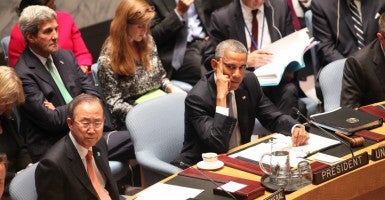 On Thursday, Obama administration officials indicated that the president was considering a fundamental shift in U.S. policy. Instead of using its veto to block United Nations Security Council pressure on Israel in peace negotiations with the Palestinians, the administration is now reportedly considering endorsing this effort.

It is hard to overstate the seriousness of such a policy change. For decades, the U.S. has used its veto in the U.N. Security Council to shield Israel from undue pressure from the world body, which has historically exhibited bias against Israel.

As affirmed by U.N. Ambassador Samantha Power a few weeks ago, “[I]t is bitterly unjust that the United Nations—an institution founded upon the idea that all nations should be treated equally—is so often used cynically by Member-States to treat Israel unequally. These attacks on Israel’s legitimacy are biased. They are ugly. And the United States of America will not rest until they stop.”

Indeed, according to U.N. records, the U.S. has used its veto in the Security Council 79 times. Forty-two of those vetoes were cast to block resolutions deemed to be biased against Israel or harmful to the Israeli-Palestinian peace process. In fact, America’s most recent veto was cast by the Obama administration in 2011 to block a resolution condemning Israeli settlements.

In sum, over half of the times that the U.S. has used its veto, it has been in the defense of Israel. Now, in response to Prime Minister Benjamin Netanyahu’s victory this week in the Israeli elections and his comments that cast doubt on his commitment to a two-state solution, the Obama administration is poised to reverse this longstanding policy position. The New York Times reports:

[S]everal administration officials said that the Obama administration may now agree to passage of a United Nations Security Council resolution embodying principles of a two-state solution that would be based on the pre-1967 lines between Israel and the West Bank and Gaza Strip and mutually agreed swaps.

This description is very similar to the substance of a December 2014 Security Council resolution offered by Jordan. The U.S. voted against that resolution, but did not technically veto it because there were insufficient votes for passage. In explaining its vote, Power stated, “Regrettably, instead of giving voice to the aspirations of both Palestinians and Israelis, this text addresses the concerns of only one side. It is deeply imbalanced and contains many elements that are not conducive to negotiations between the parties, including unconstructive deadlines that take no account of Israel’s legitimate security concerns.”

This was an entirely correct description of the text. Now, however, the Obama administration appears so vexed at Netanyahu, whom it undoubtedly hoped would lose Tuesday’s election, that it is willing to consider the very imbalanced and biased approach that it condemned only three months ago.

Netanyahu later clarified that he wanted a two-state solution but believed that it was “not achievable” today because terrorists could occupy any territory Israel withdraws from, and the Palestinians were unwilling to compromise on key issues, such as accepting Israel as a Jewish state.  Despite this realistic assessment, the Obama administration appeared eager to pressure Israel in the Security Council.

The president should take a step back and recall his own words from 2011, “[U]ltimately, it is up to the Israelis and Palestinians to take action.  No peace can be imposed upon them—not by the United States; not by anybody else.”

For decades, the United States has advocated and facilitated efforts to resolve the Israeli–Palestinian issue through a negotiated peace agreement as called for in Security Council Resolution 242 and the United Nations–sponsored Road Map for Peace. These and other documents outline the parameters of a peaceful resolution of the situation. Multiple Israeli governments have offered concessions in pursuit of peace only to see them rejected by the Palestinians and a return to violence. In effect, Palestinian intransigence has resulted in increasing pressure on Israel.

Sadly, the recent statements by administration officials that implicitly place blame for the failure of negotiations solely at the feet of Israel mirror the very bias condemned by Ambassador Power.

Instead of threatening that the U.S. would “reassess” aspects of its relationship with Israel, Obama should place blame where it belongs and demand that the Palestinian Authority halt its incitement campaign against Israel, fully meet its commitment to fight terrorism, abandon its diplomatic effort to gain unilateral statehood through the U.N. and return to negotiating directly with Israel.