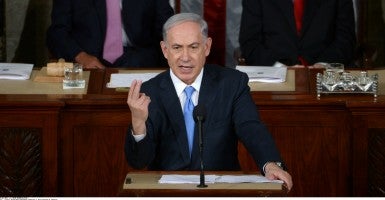 Putting both countries’ politics aside (talk about heavy-lifting!), Israeli Prime Minister Benjamin Netanyahu’s address to Congress was essential—if for no other reason than it threw a spotlight on an issue hiding in diplomatic darkness.

Few probably realized, especially outside Washington, D.C., that while Netanyahu was speaking to Congress, Secretary of State John Kerry was in Montreux, Switzerland, trying to cut a deal with Iran’s Foreign Minister Javad Zarif on Tehran’s nuclear program.

Indeed, Team Obama and Team Ayatollah had hoped to reach an agreement on nukes before the end of the month possibly without the public, perhaps even congressional, scrutiny that such an historic deal should unquestionably get.

Netanyahu changed that—and we should be thankful he did.

It might be said that if you weren’t paying attention to diplomatic developments in the nuclear negotiations, which is clearly one of the most important national security issues of our time, you are now.

The public/media attention the Iran nuclear issue will receive going forward could help ensure—clearly no guarantees, of course—that the administration gets America a better deal with Iran and not just a deal.

In fact, though President Obama criticized Netanyahu for saying “nothing new,” it’s likely that a lot of the supposedly already public information on Team Obama’s strategy was new to a lot of people—like the American public.

Perhaps that’s not something the White House wanted.

Actually, in his address, Bibi brought up a number of important points that we should be taking into consideration in our talks with Tehran.

For instance, the idea that a deal may allow Iran to keep a lot of its nuclear infrastructure in place, which would let Tehran pick up where it left off should it decide to depart an agreement.

More specifically, what about the nuclear reactor at Arak, which gives Iran a second pathway to the bomb using plutonium rather than uranium, Iran’s current choice?

Netanyahu also talked about the problem of relying on International Atomic Energy Agency (IAEA), inspectors to prevent Iran from moving forward with its nuclear program, citing North Korea’s nukes as proof of the folly of that course of action.

In fact, recent reports indicate that Tehran continues to fail to come clean on its past bomb-building work with the IAEA, a request for information that goes back years.

Not surprisingly, Netanyahu also brought up the problem of “trust” or lack thereof with Iran, a critical element for negotiations and for compliance afterwards with any agreement.

To that point, how can one get “warm-n-fuzzy” on nukes with Iran when it refuses to discuss capping its ICBM program, a long-range ballistic missile designed to carry the bomb?

Sure, this is tough stuff; we’re dealing with a hard-line regime like Iran after all—not exactly a Western-style democracy or a fan of the good ol’ U.S. of A. for several decades now.

The worry among many is that if you want it bad, which is where some believe Kerry & Co. are regarding a deal with his Iranian interlocutors, sometimes you get it bad.

Not exactly ideal when talking about an atomic agreement that involves angry, ambitious ayatollahs and the world’s most destructive weapons.