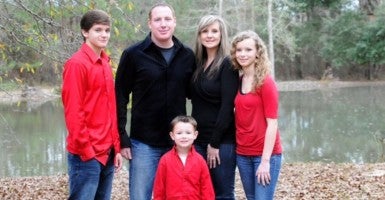 After serving multiple deployments overseas with the U.S. Army Special Forces, Josh Burns began building his own rifles at home.

In Sept. 2013, he and his wife Felicia, who also served in the military, decided they would make a business out of selling guns.

“This is his hobby that [Josh] masks as a business so he can play with guns,” Felicia told The Daily Signal recently while setting up their stand at the New Orleans Area Gun and Knife Show.

But starting their small business, Apocalypse Sports in Ponchatoula, La., wasn’t so easy.

What they found, is that because they sell guns, payment processors did not want to do business with them.

Felicia was in charge of finding a payment processor, which is a third-party outlet that handles credit card transactions between merchants and banks. In a world where credit cards are a primary method of payment, it’s one of the first things a start-up must do.

Felicia told The Daily Signal she was declined from three different payment processor companies—one of which, PayPal, froze their account.

For awhile, she only blamed herself.

“I just thought the whole payment [and] gateway system was a difficult thing to get around if you’re not a computer geek,” Felicia said, laughing.

Since this is my first start-up business, I didn’t realize that there were any different barriers to me selling guns than versus someone selling mascara or lipstick at a stand.

Felicia then came across TransNational, one of the few payment processors that does business with firearms and ammunition vendors.

From then on, she didn’t give the issue much thought.

“I’m not personally outraged,” Felicia said of her original dealings with payment processors. “It was frustrating—I just think it’s their loss.”

Another vendor who set up shop at the New Orleans gun show wonders why the product he sells would make his business more scrutinized. Wilson is currently trying to expand his business to include a flea auction site for guns, but isn’t having much luck.

One bank, after finally accepting his business, told him it would be a “24.9 percent processing charge, plus the gateway [payment] was going to be some ridiculous amount per month.”

As a comparison, PayPal, a processing company that has a blanket policy against firearms sellers, charges about 2.9 percent per transaction.

That’s how gun sellers say it works: Firearms companies eventually find the financial service they need, but often at higher rates than other small businesses would.

While some firearms sellers might blame banks for not wanting to do business with them, others blame Operation Choke Point.

Designed by the Justice Department in 2013 as a way to crack down on banks and payment processors who enable fraud, the program encourages banks to more closely monitor their customer base for fraud.

The agency does so by partnering with banking regulators to communicate to banks what is considered a “high risk” business. The Justice Department then pursues lawsuits against banks engaging in “risky” behavior.

Since the program’s initiation, the Justice Department has negotiated three settlements under Operation Choke Point, two of which were announced by the agency last week.

The controversy centers around 2011 guidelines created by the Federal Deposit Insurance Corporation (FDIC), which labeled firearms and ammunition sellers “high risk” industries, pinning them right alongside pornography and other blatantly illegal enterprises like Ponzi schemes and racist materials.

The list was adopted into the Justice Department’s Operation Choke Point.

Although the list has since been removed from official guidance, it appears banks are no more inclined to accept customers like Wilson or the Burns.

Furthermore, the question about why firearms and ammunition sellers were targeted in a program that aims to reduce fraud has yet to be answered by Justice Department officials.

Fraud and the Firearms Industry

Krista Lowery, vice president of the Target Marketing Group of Payment Alliance — another gun-friendly payment processor — told The Daily Signal that because of all the regulations in place to prevent a weapon from landing in the wrong hands, cases of fraud within the firearms industry are rare.

“Because of the strict guidelines set forth by the [Bureau of Alcohol, Tobacco, Firearms and Explosives] as to whom and how guns can be sold, firearms dealers have significantly more data on their customers than any other type of specialty retail merchant,” she said.

In other business types, a customer can order something on a website and the merchant ships the product to the address the customer specifies, essentially making it possible to never physically interact with the customer. Even in the case of internet selling, firearms have to be delivered via a [federal firearms license] holder who validates the background and identity of the customer. No other industry can be more sure of their customer.

Congress will get a chance to put Operation Choke Point under fire during a March 24 hearing hosted by the House Subcommittee on Oversight and Investigations.

Led by Rep. Sean Duffy, R-Wis., the FDIC will face questions about its involvement in the program and why citizens like the Burns and Wilson struggle to obtain basic financial services.

“Who was involved? How high does it go?” Duffy told The Daily Signal. “And has anyone been held accountable? We’re holding this hearing to get those answers. The countless people who have been impacted by this deserve those answers.”

As for Josh and Felicia Burns, though they’ve faced their fair share of frustrations, they are not worried that Operation Choke Point will force their business to shut down.

“I’m one of those people that, you tell me not to do something, I’m going to do it that much harder,” Josh said.