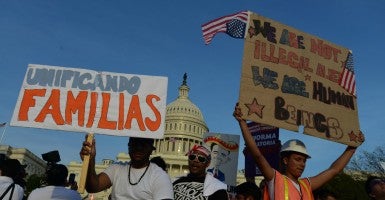 Thousands of immigrants, their families and supporters gathered in front of the US Capitol to demand Congress act now and pass immigration reform legislation to help clear the way for a path to citizenship for more than 11 million undocumented people living in the U.S. (Photo: Miguel Juarez Lugo/ZumaPress.com/Newscom)

In a letter IRS Commissioner John Koskinen sent to Sen. Chuck Grassley, R-Iowa, last week, the head of the tax agency confirmed that illegal immigrants authorized to remain in the United States and receive work permits under Obama’s recent executive actions would be able to claim the Earned Income Tax Credit for past years they were not allowed to work in the country.

Koskinen said that guidance issued by the IRS in 2000, which allows filers with a Social Security number to claim tax credits for up to three previous tax years, would still apply today.

Under the IRS’ measure, those in the country illegally are able to retroactively claim the Earned Income Tax Credit on earnings from as far back as 2011.

“The tax code shouldn’t reward those who broke our immigration laws,” said @ChuckGrassley.

The president’s executive actions would grant roughly 5 million illegal immigrants with Social Security numbers and work permits. However, it’s unknown how many of those remaining in the U.S. would be eligible for the Earned Income Tax Credit.

“Given the IRS’ interpretation of tax rules intended to prohibit undocumented workers from qualifying for the EITC, these individuals will be eligible to claim billions of dollars in tax benefits based on earnings from unauthorized work in the United States,” Grassley said in a statement.

>>> Why Scott Walker ‘Changed’ His View on Immigration

“With the stroke of a pen, the president rewarded those working illegally in the United States with a tax benefit that is designed to encourage low-income individuals to enter the workforce,” he continued.

“The tax code shouldn’t reward those who broke our immigration laws,” Grassley said.

The Daily Signal has contacted the Treasury Department to learn how much this would cost taxpayers, but has not yet received a response.

To counter the IRS’ policy, Grassley said he plans to introduce legislation that would deny illegal immigrants the ability to claim the Earned Income Tax Credit for years they worked in the U.S. illegally.

Grassley’s office said illegal immigrants would be authorized to claim the tax credit if they were given permission to work in the U.S. for the entire taxable year.

Grassley first asked Koskinen about the tax implications of the president’s policies during a Senate Finance Committee hearing last month.

At the hearing, Koskinen told Grassley that those claiming the tax credits retroactively had to have filed tax returns for the previous three years using an Individual Tax Identification Number. Koskinen also said there’s a statute of limitations on how far back those claiming earned income tax credits can go.